In the past four months, I have interviewed a lot of people about topics such as politics, human rights, the revolution, and so on. One of the things I have come to realise is that, on the one hand, a lot has changed in Egypt the past few years, while on the other hand, a lot of things are back to the way they were before.

Knowing this, it seemed like a good idea for a last blog post to try to find out what the thoughts of Egyptian people are on ‘change’. I approached some of the people I got to know during my four months in Cairo and the leading question I asked all of them was: ‘How do you see Egypt in one year?’.

My tactic was to ask this question without directing it to any field of interest at first. What I thought was striking is that most people immediately thought of the political situation in Egypt when hearing this question, yet they all gave different answers. For instance, my friend Mo told me that he believes politics is going to stay the same, while my friend Heba said that her prediction is that there will be a shifting point in politics, though not in the very near future.

I also asked our bawwāb about his views on this topic. In Cairo, every building has a bawwāb, the caretaker of a building. I live in a sixteen story-tall building so we have more than one bawwāb, which means there is always, day and night, someone to welcome me home. When I asked Yassin, our main bawwāb, about his opinion, he passionately told me, ‘Sisi is very good and he will make all things in Egypt better’. 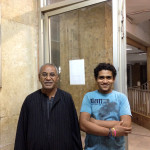 Yassin (left) is one of the bawwāb’s in Emma’s apartment building.

The divergent answers of Mo, Heba, and Yassin (all totally different people) and the way they openly talked about politics reminded me of something that I had been told before: all Egyptians, whatever their age, background, or political preferences, have become more politically aware since the revolution. For me, it was interesting to hear that all three of them had such different ideas on the concept of change in Egypt. In the end though, it seemed like they agreed on one thing: change is only going to happen if people themselves change as well.

As for me, I personally think it is hard to predict what will happen in the upcoming year. After being here for four months, Egypt has proved to be a very, very surprising country where anything is possible. However, I do believe that, as Heba perfectly described to me, ‘Real change happens over a long period of time. It doesn’t happen in the blink of an eye’.

I hope to be in Cairo again sometime in the near future to see for myself what has changed and what has not.