According to experts in Europe and China, Groningen’s partnership with China Agricultural University presents opportunities as well as challenges.
By Traci White

During the Dutch trade mission back in March, RUG president Sibrand Poppema paid a visit to Nick Miles, vice chancellor at University of Nottingham Ningbo China. Via Skype, Miles says that he thinks the RUG’s plans have a lot of potential for success.

‘I know Groningen. It’s a quality place with quality people, and it meshes nicely with some of the key issues here in China, like food safety and health’, he says. The British branch campus has been operating in Ningbo, a city relatively close to Shanghai, since 2004 and was the first Sino-foreign partnership institution. It’s also a university that Poppema says that the RUG plans to closely model itself after.

‘The challenge will be in Groningen’

But Miles acknowledges that launching a branch campus is a daunting task, perhaps more so at the home institution than in China. ‘The challenge will be in Groningen’, he says. ‘You’ve got to give it a bit of time and build up people’s confidence.’

Although most branches are located in the vicinity of Shanghai, Miles actually says that the RUG’s planned campus being located in Yantai is likely to offer a competitive edge. People from more rural provinces across China have relocated en masse to the largest cities in the country for years, but environmental factors like air quality and lower population density are beginning to become more attractive.

‘A few years ago, I would have said you’ve really got to be in Beijing, Shanghai or Guangzhou’, he says. ‘Not now. Pollution is pretty bad, so people are beginning to think that they want a better quality of life.’ 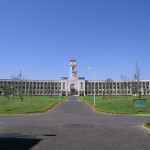 Miles says that learning outcomes and research ethics are the same at both of Nottingham’s sister universities – they also have a campus in Kuala Lumpur – as they are in the United Kingdom. In fact, graduates of any of the universities receive exactly the same diploma with no indication of which campus they attended. The Ningbo campus also has a research ethics committee similar to one that exists in the U.K.

The subject matter of some courses is adapted to reflect the national context, though. ‘Why would we teach a business course that’s got a European outlook when we’re in the middle of China, which is the second largest economy in the world?’

According to Miles, UNNC is a result of a Chinese government experiment undertaken a decade ago to tackle systematically high unemployment levels in the country. The idea was that branch campuses from western institutions would teach students more soft skills – like ‘critical reasoning, the ability to work in a team, to give presentations and have confidence’ – that make them more attractive as job candidates.

‘Why would we be invited here and then be suppressed?’


Like all Chinese universities, the government also fulfils a direct role at Sino-foreign collaborations. ‘We exist in China, so I have a deputy party secretary who sits in my management board. So what?’ Miles says. UNNC doesn’t receive any state funding, and Miles insists that the deputy party secretary’s presence does not prevent the school from being an open academic environment. ‘Why would we be invited here and then be suppressed?’

According to Jan van der Putten, a former foreign correspondent and a China specialist, the person at the top of a Chinese university is invariably a leading member of the Communist party. ‘The person with the most say at a university is not someone who got there because of their research achievements, but because of their achievements within the Communist party’, he says.

‘They may not know how to run a university, but they don’t need to know, because it’s about political control’, Van der Putten says. ‘In China, in all instances where a party boss sits in a top position at an organisation, it’s the second-in-charge who runs things day-to-day but isn’t the most important in terms of responsibility. It is a totalitarian society, so the party is in charge in the end.’

Van der Putten says that the level of repression in China within universities in particular has not been as bad as it is now since the days of Chairman Mao. Late last year, a Communist-run newspaper in northeast China published an article calling on scholars to ‘refrain from making overly negative comments about the country, its society and its political system.’


‘The ideological control of the whole society has increased significantly of late under Xi Jinping, including the universities being told that they can’t use western books any more’, he says. ‘That seems a little bit weird, because if I’m not mistaken, Marx came from the west.’

Although there have been cases of instructors losing their jobs due to their political views, Van der Putten says that action is not always taken against lecturers when new policies are proposed. But it could still be used against you, he says. ‘If the government is paying attention to you for another reason at some point, they could say, ‘you didn’t abide by this other rule’. It can basically be an excuse if something goes wrong to punish you.’

While Poppema sees Yantai as an opportunity to start teaching with the Learning Communities and International Classroom structure from the beginning, Van der Putten says that group work is still not very common in China. Another potential challenge is that young students coming from Chinese high schools may be unaccustomed to asking critical questions in class.

‘U.S. schools didn’t know how to confirm their language skills’, he says via Skype. ‘The high test scores they would get would not always reflect the actual language skills of an applicant. The system in China is not set up in a way to produce reliable documents that admissions officers can rely upon.’ Since the RUG curriculum at Yantai will be taught in English, Crawford says that he believes InitialView could be a helpful tool for Groningen as well.


The fact that Shandong province, where Yantai is located, is so densely populated is a potential boon for Groningen. ‘There’s a massive number of people taking the gaokao in Shandong and it’s possible that there’s a group of students who are smart, can speak okay English and whose family wants to have a more western style education. If the tuition is financially competitive, then it is certainly possible that there is a market for that.’

While UNNC’s Miles may think that priorities are changing within China, Crawford isn’t so sure that Yantai will actually be attractive for students coming from outside the province. ‘In the mind of a Chinese person, Shanghai is very different from Yantai.’