Living in a church

Casa Mundo – ‘The house of the world’ – is a former church that Ruimzicht Foundation bought and transformed into an international convivium. Since last September, it has been a house where Dutch and international students live together.
By Blanca Civit

Although this is the third student residence of Ruimzicht in Groningen – there is also Moeshoes, located in an old monastery on the Moesstraat, and Pakhuis London – Casa Mundo is a new experiment for the foundation.

Like the reality show Big Brother minus the cameras, not just anyone can live in the house. The fifteen residents are carefully selected: the house accepts only eight Dutch residents, primarily master’s students, PhD candidates or people working in their first jobs who have a connection to Ruimzicht and respect the values of Protestantism.

The other seven housemates are international students selected by the Faculty of Theology of the RUG who have been accepted into a one year master program. The University provides them with a room at Casa Mundo plus other services, like a bike and pastoral care during the academic year.

While living together, all of the residents of Casa Mundo are expected to respect and help each other. All of them come from very different backgrounds and countries, including Myanmar, Uganda, Hungary, China, Ecuador, South Korea and the Netherlands.

The residence still feels like a church with distinctive architecture and colorful windows, but it has been converted into fifteen bedrooms that are about 20 meters squared. Each has a private bathroom, and each floor has a shared kitchen.

The main hall of the church was transformed into a common room about the size of the Harmonie building canteen. It’s filled with a dinner table, sofas, a TV, a small library, a piano and a small stage for performances. The all-inclusive rent is around 400 euros a month. 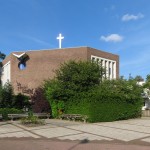 The Stadsparkkerk on the Snelliusstraat in Groningen, which is now home to Casa Mundo.

Every Tuesday, all of the residents participate in the Convivium Night, a moment to share their lives and socialize. They start by cooking a traditional dish from the home country of one of the housemates and then eat together in the common room. During dessert, it’s time to open up and share personal experiences with the rest of the table as a way to bond with their housemates.

After doing the dishes, Casa Mundo members sit on the sofa to listen to a presentation by one of the residents about his home country. Eui Seuk, who also goes by “Lee”, is a Master’s student of Theology and was responsible introducing his country, South Korea, to his housemates this week. Through the weekly lectures, the residents learn about each other’s values and culture. 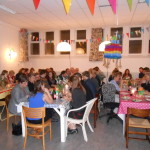 Students gather in the common room at Casa Mundo.

For Lee, Casa Mundo is a great opportunity to live with internationals and Dutch people. ‘I can celebrate together traditions like Sinterklaas or try stampot.’

During the Convivium Night, Casa Mundo’s housemates also reserve a few minutes for the Practical Talk, a time to solve everyday conflicts like how do to certain household chores.

While having tea and stroopwafels, it’s time for the gezelligheid and the ‘Limo’: the Liturgical Moment. They light a church candle for reflection and then either watch or read something together to start a deep conversation about beliefs, points of view and religious experiences.

One of the Dutch captains of Casa Mundo – Margje Schuurman, a 27-year-old artist – decided to be part of the project after living a few years in Indonesia and the Netherlands with her parents: ‘It is more than sharing a house, it’s learning to live with other cultures and respecting them, maybe even experiencing communication problems sometimes. Before living here, we followed an intake course – a ‘Convivium Day’ – to learn how to create a community and be hospitable with the others.’

Although Casa Mundo may seem like paradise to its members, it is not suitable for atheists or students of other religions: belief in Protestant Christianity is an important factor in feeling at home in the Ruimzicht residences.