The first TEDxUniversityofGroningen was organized by students and featured six talented speakers.
By Blanca Civit

The inaugural TEDxUniversityofGronigen was held on Wednesday night and proved that students can be a powerful source of inspiration, talent, creativity and humanity. A handful of students took the initiative to create the RUG’s own TEDx, an independently organised TED event.

It’s actually the third TEDx event in the city of Groningen. TEDxGroningen has been held for several years and a TEDxYouth event will be held next week, but students took the lead in bringing the non-profit TEDx event to the RUG. The organizing team, supported by the University with a budget of 3,000 euros, were all students, both Dutch and international. The speakers were mostly Dutch students and professors, and the audience was primarily students.

It all started eight months ago when Katrin Heinzerling, a German student of Chemistry, decided to ask for a licence to make TEDxUniversityofGroningen happen. ‘The idea was create a little event that was cozier and to invite people to interact with each other after the talks. They could connect while having a break and simply share creative ideas’, she explains, ‘We had the limitation of 100 seats, although 300 people wanted to buy a ticket. For the organization, this was already a success.’ 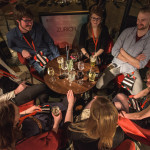 Guests talk and drink during a break at TEDxUniversityofGroningen. Photo by Zoltan Acs.

Although the average age of an event attendee was in the early 20s, the organization was open to speakers of all ages and academic backgrounds. Marvin Kunz, responsible for curating the speakers, says that the topics did not have to be directly related to the University, but all of the projects had to involve Groningen or the University community in some way. ‘We selected talks that would be interesting for all audiences and topics that might sound familiar – like science, music or food – and gave them a new approach.’

The event took place in Groninger Forum and was hosted by RUG philosophy professor Hans Harbers. Audience members were treated to a warm welcome that included a TEDx gift box and free coffee. During the first part of the programme, Maia Elliott, who is already an experienced TEDx talker, told the audience a story about epigenetics and how our lifestyle influences our DNA. 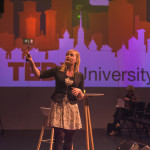 The second guest of the night was Ivanka Annot, a revolutionary artist and creator of the Free Café, a money-free restaurant in Groningen that is run by volunteers who cook with discarded food from markets and grocery stores.

After a dinner break, the only professorial speaker of the night took the stage. From the department of Behavioural and Social Sciences, professor Trudy Dehue explained how science can partially shape our reality. Next, special guest singer-songwriter Stuart Mavis’s talk was actually mostly sung.

Simon Waslander, a medical student, sought to surprise the audience with the secret health powers of cocoa. The last speaker, the UK’s own Christiaan Triebert, shared his passion for hitchhiking and spoke about the kindness and humanity he found while traveling around the world. 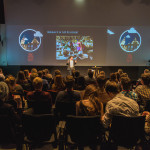 Once the talks ended, the event continued at the bar, where audience members had the opportunity to ask the speakers questions over a beer. For Miguel Santim, a master’s student from Mexico, it was his first TEDx. He had watched TED talks online before, but ‘going to a local TED was a very different experience’, he says. ‘I really liked being here and I found all the topics very interesting.’

It was also the first time for some of the speakers, like Ivanka Annot. She says, ‘The experience has been a bit uncomfortable, because it is difficult to express in words all the passion around a big project in a limited time and speech’. Now that it’s over though, she says that she loved having the opportunity to empower people and sharing the stage with a great line-up.

After the intense, four-hour long event, the organization called on anyone who may be interested in TEDxUniversityGroningen to create a new team for next year and prepare to apply for a licence.