Traffic rules are harder than you think

Shark teeth? Right of way? Uitgezonderd? To Dutch people, it may seem that international students simply don't know how to bike. But it's just hard for them to learn the traffic rules.
By Katherine Watts / Photos by Traci White

It can be difficult for international students to learn how to navigate Dutch traffic safely. For Stephanie González, a 20-year-old mathematics bachelor’s student from Great Britain, knowing who has right of way in the Netherlands could have helped her avoid a cycling mishap of her own.

‘Once, I was going round a corner and a motorcycle was coming towards me, and I panicked and swerved straight into it. It was so embarrassing. But I wasn’t badly hurt – I just flew off my bike’, she says, laughing. ‘I think it was my own fault – I’m a bit of a reckless cyclist!’

Other international students confirm that it is difficult to know when you have right of way. The ‘shark teeth’ – white triangles at an intersection – indicate that you have to give way, but few non-Dutch students understand what the symbol means. 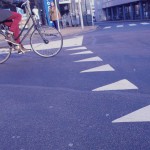 The so-called ‘shark teeth’ indicate that you have to yield at an intersection.

‘There are so many different rules here than from back home’, Fabian adds. Not understanding those differences and not knowing where to go to learn them leaves some international students feeling left in the dark.

What other rules are international students in Groningen unaware of? According to student police officer Matthijs Beukema, the most common issues tend to be cycling against traffic, and failing to recognize ‘No Entry’ signs: white, circular signs with a red outer circle. 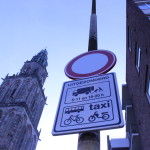 The ‘No Entry’ signs are white circles with a red outer circle. ‘Uitgezonderd’ means ‘except for’ – almost all roads are available to bikes.

However, Beukema says that it is difficult to establish how many international students are involved in bike accidents in Groningen. When an incident is reported, the nationalities of the people involved are not registered. Between 2008 and 2012, which is the most recent available data, 46 bike accidents were reported to the police in Groningen. Of all traffic incidents in 2012 nationwide, 41% resulted in a cyclist being injured.

Fortunately for Seidler and Kunnen, neither of them has yet had a wreck, but both have witnessed accidents involving foreign students. But where can students find information on how to ride their bikes safely in Groningen?

ESN hosts a bike and road safety course during the Introduction Week each term, agent Beukema and Jan Wolthuis, Education and Students officer at the University of Groningen, point out. ACLO, the student athletics facilities, also provides information on road safety. But could the University itself do more?

‘The University informs students in general about life in Groningen, for example, in the Welcome to Groningen handbook. As far as I know, there is no information in this handbook on road safety’, he says. This subject falls to others, Wolthuis believes. ‘That responsibility lies with the municipality and the police. Students are also responsible for their own safety.’ 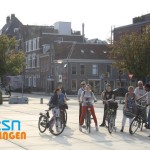 Even though ESN offers some help, it by no means covers everything, says integration Coordinator Willemijn de Groot. In fact, ‘there isn’t much enthusiasm for our cycling course.’

Are there any other ways to help internationals learn to cycle safely? There used to be workshops held by the police on road safety, bicycle theft and burglaries, Beukema says, but this year, there wasn’t. ‘Why not? No idea. We were not invited to do one this year.’

Bus drivers from Qbuzz see the whole discussion in a different light. Spokesperson Bonnie Ellens says that bus drivers see no difference whatsoever between international students’ cycling and Dutch students. Cyclists in general either don’t know the rules or don’t want to know the rules. As far as the bus drivers see it, many cyclists seem to have little concern for the dangers they face.