If you are keen on having all the advantages of a small, well-organised and relatively quiet city like Groningen, Moscow will definitely not steal your heart. Certain things here just do not work as well as they do in our cozy little student ‘town’.
By Lisse van Vliet

Normally, I consider it a healthy challenge to make everything work. But on this one day in particular, I already got the message that both my Russian public transport card and visa extension were no good. Then, the university library forbade me from taking the books I ordered, and I had to climb behind a sink in order to maneuver myself onto the toilet. When things stack up like that, it can all get a bit frustrating.

The notorious bureaucracy in Russia is a thing apart, bringing with it long hours spent waiting and time-consuming searching for the various application offices. My wallet has never been so full of different university documents whereas at the University of Groningen, we only have a student card. Currently, I own a library card, an official pass to get through the university gates and an old Soviet style ‘Студенческий Билет’ (Student ID). There should be another one – the Social Card – but many exchange students did not get it for various reasons.

‘Some of the stations are no less than museums’
One of the problems that Russia faces is the infrastructure around Moscow; the road leading to Saint Petersburg especially is gravely underdeveloped. Last year, I spent twenty hours traveling a distance that would only have taken eight if there had been more than two lanes. The fact that this road passes through small towns further obstructed the journey. A friend told me about a bridge that needed maintenance every three years, but since this maintenance takes four years, the job is never finished. As one teacher joked quite fittingly, ‘Actually, nothing works in Russia. Well, the metro does, but that is just a miracle.’

The Moscow metro, comprising 197 stations and a route length of 329 km, is truly one of the smoothest working systems in Russia. It has an average of around 7 million passengers a day and represents Moscow’s past epoch. Some of the stations, especially on the brown line, are no less than museums. A variety of statues, mosaics on walls and ceilings and large architectural features can be found there, most of them in the style of Soviet Realist art. 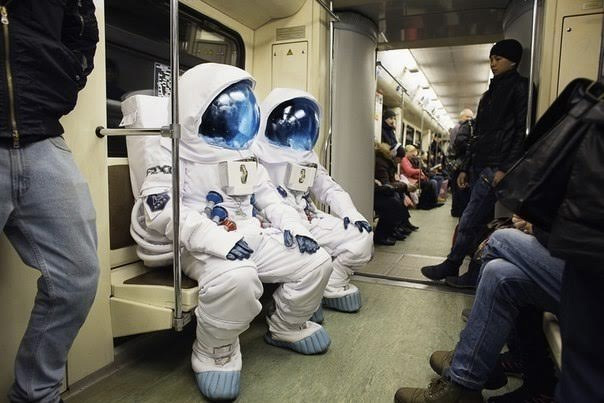 The streams of people, the astonishing art and the general enormity of the whole ant colony-like structure make the metro a true highlight in Moscow. In the metro, virtually all-social classes are represented. This diversity even led to the creation of the ‘Metro Fashion’ page on VK (Russian Facebook), where you can find the most random people spotted there. The musicians jumping in and out the metro to earn some Rubles certainly add to the energy of this place.

The metro is, however, not completely free of imperfection, and lately, parts of it have temporarily closed for various reasons. When this happens, you can expect complete madness at the junctions with thousands of people crammed together in low tunnels, fighting for a spot on the metro or the escalator (which descends 70 meters underground). Another thing that becomes very apparent is the discrimination against Caucasian or Central Asian-looking people. They are always forced to show their documents to the police and are checked much more often than others.

Moscow is certainly nothing like the Netherlands, but with all its vices, it will never be boring. While eating some pindakaas and hagelslag, traded with a German co-student, I figure that studying in Groningen is at least more practical.