Hit people with a traditional sword

You get to fight with actual longswords and you shouldn't be surprised if you bruise a rib in a tournament. The fighters of sword fighting school MARS are no pussies.
By Lenja Bystrykh

Seeing knights wield longswords may seem like a thing of the past, but that’s not necessarily true. Sports association MARS teaches its members Historical European Martial Arts (HEMA), aims to practice them as perfectly as possible and uses them at tournaments all over Europe. Every week, fighters get together and practice their art for hours on end. 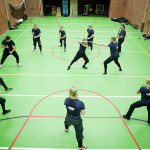 ‘Sword fighting is not only physically heavy but also requires constant vigilance.’

The replica nylon and steel swords not only look like their Medieval and Renaissance counterparts – ‘They feel real’, says 20-year-old Majken Roelfszema.

The Mathematics student has been a member of sword fighting association MARS for a year and a half now. Having previously played hockey, she didn’t expect to end up loving sword fighting so much, but she was dragged over by her friend and gave it a go. Now, Majken is hooked, even though her friend dropped out. She trains for five hours every week.

Many people expect swordfighting to be like fencing, but it isn’t. For starters, there are fewer of the rules that make fencing more of a simulation than a martial art to co-founder Jan Willem Hofstede. The Philosophy and Physics student is both a board member and a teacher. He loves it: ‘I can hit people with a traditional sword – what other sport allows that?’

It’s so much more than people swinging around swords, he says. ‘You learn to fight, but you also study historical fighting forms.’ He sees it as a combination of academics and athletics.

MARS teaches many different elements of medieval martial arts, ranging from longsword combat to Middle Ages wrestling. ‘We study primary and secondary sources on how people fought in those days’, he explains.

This tangible historical reference point makes Jan Willem enjoy the fighting even more. ‘It’s like living in history.’ And he’s not the only one captivated by the idea that he – or she – is reinterpreting things that may have been done 700 years ago.

‘It hardly ever takes more than a few moments before a hit is landed.’


Still, the sport is misunderstood. Long and elaborate fights like you see in the movies rarely happen. A sword can weigh up to 1.5 kilos and you tire easily, because fighting with these historical weapons means that you have to move with your entire body constantly. You never know when or precisely how your opponent might attack – when he does, you need both your body and your weapon to be in the right place. That means it’s not only physically heavy but also requires constant vigilance.

‘Swordfighting is very intense’, Jan-Willem says. ‘It hardly ever takes more than a few moments before a hit is landed.’

That makes sense, considering that the only real goal is to kill your opponent rather than create a beautifully choreographed film sequence. 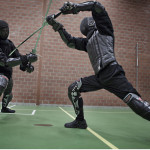 The stereotypes that people have about it frustrate Jan Willem. ‘People are quick to assume we do things like cosplay or passive reenactments’, he says, but that’s not the case at all. The sport is difficult and injuries may happen. ‘One of our members broke a finger one and a half years ago. That’s always a risk, although we did adjust our safety regulations after that happened.’

At tournaments, the going really gets tough. One of the other instructors of the school won first place in a tournament last year. However, it cost him a bruised rib. Knowing such stories, Majken’s mother often asks her whether chess might be a better alternative. ‘I hide any bruises when I can’, she says, laughing.

Even though the sport may get rough, it’s a conscious choice by the fighters to take that risk. ‘Some of our members refrain from tournaments and free sparring since that’s when injuries usually happen’, says Jan-Willem.

‘I have been told that I’ve become more outspoken’


Majken participated in her first tournament a few weeks ago and absolutely loved it. ‘You feel such great satisfaction when all the things you learned translate so seamlessly into a match’, she says. She defeated just under half of her matchups.

Sword fighting teaches her control and self-confidence. ‘I didn’t notice, but I have been told that I’ve become more outspoken’, Majken says. Ironically enough, she has actually been taught to be less aggressive.

‘I see myself doing this for a long time’, she says. As for Majken’s mother, she can rest assured: Majken sees it as playing a type of chess when sword fighting. ‘I’ve learned to focus better and to plan my moves’, she says. In fact, one of the practice drills is called ‘chess.’