The 50th Super Bowl took place on Sunday night, and more than 100 million Americans tuned in to the game between the two best American football teams from the past season. Inside the Drie Gezusters, the former and current student members of the Groningen Giants joined in the celebrations.
Text and photo by Koen Marée / Translation by Traci White

With cheerleaders bounding from room to room, American flags decking the walls and red SOLO cups on the tables, roughly 1,500 visitors anxiously wait for the game to kick off.

‘Shivering cheerleaders encourage the players’
For many in attendance, it’s a wholly unfamiliar sport. Lucky for them, several videos about the basics of football were shared on the event’s Facebook page in advance. But even if they didn’t study up before hand, those familiar with the game were eager to explain the rules to the newbies.

Giants chairperson Johan Oosterhuis is wandering around in an orange Peyton Manning jersey. Manning is the go-to guy for the Denver Broncos tonight, but their opponents – the Carolina Panthers – have the young up-and-comer Cam Newton in their ranks. Both players are the quarterbacks for their respective teams, a crucial, game-changing position.

The duo has been endlessly compared in recent weeks. Even de Volkskrant published a political analysis of the two key players, with the American primary election season in mind. The ‘dab’ – Newton’s iconic touchdown celebration dance – was also analysed. Hillary Clinton even gave it a try. The Super Bowl, which Manning has already won with another team once before, could be the final game of his career, whereas Newton still has years ahead of him.

‘I’ve been a Broncos fan for years’, Oosterhuis says. ‘But I could see the Panthers winning it, too.’ The chairperson is proud of the party, which has been organised by his team: ‘This is definitely the biggest party in the Netherlands. There are a couple in Amsterdam as well, but they don’t attract quite so many guests. They may say, ‘you don’t have any competition’, but isn’t that a good thing?’

Football on the Grote Markt

I spoke with the chairperson during half-time. While the Broncos have taken the lead and millions of viewers are entertained by Coldplay, the Groningen die-hards decide to play a pick up game on the Grote Markt – at two in the morning. ‘But we need a ball first. Two guys had promised to bring one, but they both forgot.’ 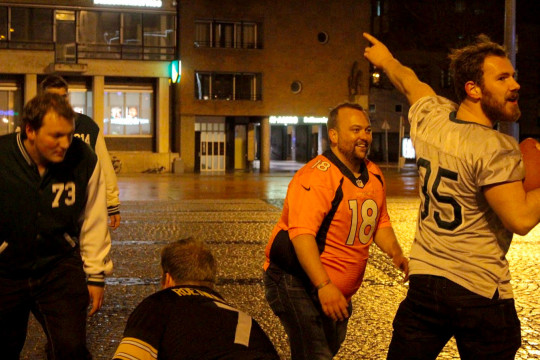 The problem is solved before the second half starts, though. Quite a few players jump in to play, fighting over possession of the same meters over and over again. Shivering cheerleaders encourage the players from the sidelines, and a passer by tosses his bike aside to join in. He gets a high five.

The game ends in a hurry when the players on the Grote Markt get word that the game has started again in California, and it’s a close one. A 10-7 lead could be easily overcome by the Panthers. I’m starting to see why so many American are clustered around the television today, as well as why business are so eager to pay such idiotic amounts of money – nearly 200,000 dollars per second – to advertise during the timeouts. The whole event doesn’t take longer than four hours for nothing. Sadly we don’t get to see the commercials in the Netherlands (an ad featuring Queen-covering sheep seems to have been the most popular), but a boring stadium shot instead.

The Broncos jump ahead to 16-7, and the game fizzles out, along with the light in the eyes of those in attendance who begin to yawn more brazenly. But the majority still hold out until the end before calling it a night. The final score is 24-10 for the Broncos, and the party was a huge success. The chairperson for the Giants should be pleased.