Some fixies don’t have brakes at all

Alexander and Charles just love those uncomfortable, potentially dangerous and incredibly fast fixed-gear racing bikes. When their room became too full with spare parts, they started their own ‘fixie’ company.
By Nathan Thompson

A fixed-gear, or ‘fixie’, is a bike mostly used for racing; it can potentially go as fast as you can pedal. You can’t coast on a ‘fixie’, but you can ride backwards with a bit of practice. ‘Fixies’ also have no rear brake. In fact, some don’t have any brakes at all and rely on the rider’s ability to control the pedals.

Swiss law student Alexander ‘Scotty’ Goedkoop  and his Dutch friend and business partner, Charles de Beaufort, who is studying Business and Administration, just love them. In fact, they have turned their biking hobby into a non-profit business, so that the student community can experience the Dutch biking culture to its fullest. 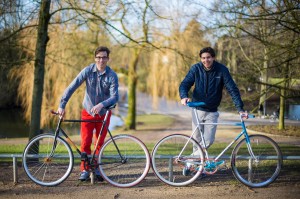 Alexander and Charles with their fixies

‘We started with buying some classic bike frames from the 70s and the 80s’, says Scotty. ‘We didn’t have any intention of selling them.’ Most of the parts for these bikes were purchased at reasonable prices from elsewhere in the city. ‘People here in the Netherlands have such a high regard for students and want to help them’, explains Scotty.

After a year, though, they had built seven bikes, which take up a lot of space, and that is without the extra parts. ‘They started to clutter up our rooms, so we decided to sell them.’

They have a website called ‘Ride Doggy’. It was created with the help of some friends, who volunteered their expertise in website building and photography. It was launched in February.

Starting a business in the Netherlands can be an easy process, according to Scotty. ‘The main thing that holds people back is laziness,’ he says casually. ‘They just don’t realize how easy it is. If you have a good concept, people will spread the word about it and help you out.’

Scotty and Charles did have some concerns, though. ‘We were worried about the legality of these bikes’, admits Scotty. ‘The law about fixed-gear bikes and their braking systems is unclear.’

However, they checked it out and discovered that it is legal to sell the bikes, although the rider must be able to handle the bike and to stop safely. ‘Not everyone can ride them.’

You can’t coast on these bikes and the odd design of the handlebars does take some getting used to. ‘But once you do, they’re great to ride’, says Scotty. ‘When I was back home, I used to mountain-bike and ski all the time. I loved the adrenaline rush and riding these bikes gives the same rush. They are the Ferraris of bikes.’