Student in Groningen, model in Singapore

Like most first year students, Samradha ‘Samy’ Sanjeev spent last week trying to figure out where she would be living and where her classes would be held starting this week. But unlike her fellow classmates, Samy will end the first week of lessons in Groningen by travelling 16 hours to Singapore to rehearse for the finale of a high-profile modelling competition.
By Traci White

Samy, a 19-year-old student from Singapore, thinks Groningen is adorable. She lived her whole life in Singapore, an Asian city-state with a population of more than 5 million people. She arrived in Groningen last week with her family to search for an apartment for her and her brother, who will also be studying at the RUG. She’s embracing the charms of a European lifestyle: enjoying glasses of wine, walking to a bakery in the morning for breakfast, and breathing easier in this much smaller city with so little traffic.

But perhaps her favourite aspect of Groningen life so far is how well she fits in among the tallest people in the world. ‘I can look people in the eye! It’s awesome’, says the 183-centimetre (six-foot) tall Samy, laughing. By Singaporean standards, she’s remarkably lanky and for one of the first times in her life so far, her height is a definite advantage: she is the tallest competitor in the 23rd annual New Paper New Face modelling competition in Singapore. 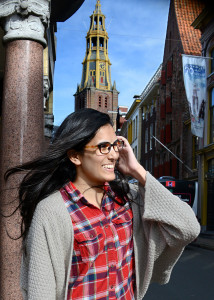 She also finds herself sizing up the Dutch girls around her for their potential in the modelling world. ‘Coming here, I’m just looking at all these girls and I’m thinking, ‘You should go to Singapore. You could go very far with those long legs.’’

Her facial structure is elegantly angular and offset with energetic brown eyes and a ready smile, even though she prefers to go for more serious poses in her photo shoots. While she says that she has become more at ease with being dressed up and vogue-ing for fashion shoots, her preferred style is more laid back. ‘I’m not used to heels, I like my sneakers and flats and comfortable stuff.’

She’s also well aware that some people may see the worlds of modelling and university as incompatible, an assumption that seriously bothers her. ‘The thing that gets to me is if someone has a stereotype about a model and then meets someone who contradicts it but they’re still not willing to believe it. Why aren’t you willing to question it? That’s what really annoys me.’

She doesn’t recognise the stereotype that models aren’t smart at all in her fellow competitors, either. ‘One girl that I did a MAC Cosmetics lip line event with has a bioscience degree and wants to become a teacher’, she says.

She is about to begin her freshman year studying Economics and Business Economics herself, a subject she has long been passionate about. ‘I knew from a young age that I wanted to do economics and business. I felt like I knew what I wanted to do, but I had to do all of these other subjects in the middle of it to get through it and get to what I really wanted to study.’

Several other girls in the competition are currently enrolled at universities closer to Singapore, and Samy says that she has to admire the work ethic of the women around her. ‘At one shoot, I came in and complained that I was so tired because I went to bed at 1, and one of the other girls looked at me and said, ‘I went to bed at 7 and I was up at 8’. So I thought, okay. I don’t want to win this one. Thank god I didn’t win this one.’

She admits that if she goes on to win the finale fashion show on 1 October, she’s not sure what the coming months hold in terms of her ability to balance school and pursuing modelling further. ‘I never expected myself to possibly be travelling back and forth once I came here. I just thought I was going to pack up all my things, go off to university, spend three years there, get visits from my parents and go home for holidays, but just to start a new life and continue it. But all of a sudden, this came up two months ago and everything changed.’

Samy’s dad just happened to see an ad about the competition in the local newspaper – New Paper – earlier this summer. Modelling was something that Samy had been interested in trying, and while her parents are supportive of her participating in this competition, they had encouraged her to first finish off her international baccalaureate degree before pursuing it more seriously.

Now Samy is one of the top 20 finalists in a competition that can seriously launch a model’s career. Previous winners have been featured in Vogue magazine and have worked on campaigns for companies such as Sunsilk and Maybelline. Samy has already done photo shoots for Levi’s, Subaru and MAC Cosmetics through the competition in the past couple of months.

While the timing of starting her first year at university in a country on the other side of the world coinciding with such a big potential opportunity isn’t exactly easy, Samy’s motto seems to be carpe diem. ‘I don’t regret it one bit, I’ve had a blast this summer. I got to do a lot of things I didn’t know I could have done. I got to sit on a car and take pictures, so sure, it was odd timing, but I don’t care. I want to do it, so why not?’

They truly love the RUG