Stephan Peters spent four years investigating the shape of something you can't even see. Now he knows the mysterious dark matter around galaxies is a shaped like a rugby ball.
Door Wendy Docters

He was nervous with half an hour to go before his thesis defence as he waited along with his paranymphs in the faculty room. ‘You never know how many difficult questions you’re going to get.’ But really, if you choose a subject like dark matter for your 276 page-long thesis, you can’t reasonably expect it to be easy.

Dark matter is one of the greatest mysteries in nature and astronomy: after all, we can’t even see it. Yet scientists have known that it exists since the ‘70s, thanks to the way that stars, gas and planets move in the areas near black holes in different galaxies.

‘It looks similar to the relationship between the earth and the moon’, Peters explains. ‘The gravity of the earth tries to pull the moon closer to it, but the turning motion of the moon works against this. That way, everything stays in its place.’ If our gravity was stronger, the moon would crash into the earth. If the moon rotated any faster, it would fly away into space. It’s actually a subtle balancing act. 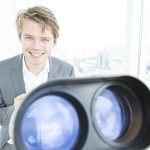 ‘When I look up at the brilliant stars above me, I remember, ‘That’s what I’m studying.’

Scientists can calculate how fast a galaxy has to rotate in order to remain stable, but in doing so, they have discovered that galaxies turn much faster than calculations would predict. This can be explained by extra gravity, which means that a large amount of invisible material must also be present. ‘This was somewhat unimaginatively named dark matter’, says Peters, laughing.

Sphere around the galaxy

In order to research exactly what dark matter is, Peters looked into how it is distributed across our galaxy. ‘We know that dark matter forms a sort of sphere around the visible galaxy, but what that sphere looks like, we don’t exactly know.’ But to understand what you can’t see, you first have to understand what you can. So, Peters worked on making more exact determinations of the mass of the visible material.

He demonstrated that a portion of the visible mass could be hidden behind a layer of thick gas. ‘The phenomenon somewhat resembles a fog. You can’t tell if it’s 10 meters or 10 kilometers thick’, says Peters. ‘With galaxies, we can only look a certain distance into the gas, so we don’t know what’s behind it.’

Even though a lot of dark matter is needed to understand the rotations of the stars, planets and gas, Peters came to the conclusion that there is less of it than initially thought and that it is distributed around and throughout galaxies. With this discovery, Peters created a model of the dark matter in our Milky Way galaxy and predicted that it is shaped like a rugby ball.

Developing the software for the model took a lot of time: Peters feels at times that he ought to be receiving a degree in IT rather than astronomy. ‘But if I spend a long winter’s day at work, when I leave to go home and look up at the brilliant stars above me, I remember, ‘Oh yeah, that’s what I’m studying.’’

Suffering for a good cause