Carel Horstmeier: fascinated by the GDR

‘Rome wasn’t built in a day’ could be the maxim for Carel Horstmeier’s PhD project about the German Democratic Republic (GDR). Horstmeier, a lecturer with the International Relations & International Organization (IRIO) department, started his thesis in 1996. Now, 18 years on, he will finally be awarded his PhD for it.
By Verena Rendel

His fascination with the GDR dates back to his student days and the fall of the Berlin Wall. As a German student, he had the opportunity to attend a summer course in Germany in 1988. He recalls: ‘I thought I should go, but I didn’t really want to visit the grey, sad and boring GDR’, he laughs. ‘Three months later the Berlin Wall came down and I was so fascinated then that I really wanted to visit.’

Horstmeier was especially interested in the lack of recognition of the GDR in Western Europe. He thought it was clear the GDR initially failed to make any effort to be officially recognized. He explains: ‘For 23 years, from 1949 to 1972, the GDR was not recognized internationally by the majority of countries. However, from 1973 to 1989 – or 1990 if we are being kind – it was. It was a big success for the West that it was able to isolate the GDR for so long.’

To end their isolation among the global community the GDR established lobbying committees in 55 countries around the world. Horstmeier explains how members of these friendship committees were often inactive or unsuccessful. ‘If they did manage to approach politicians or even governments, this yielded very little.’

The Dutch committee, for example, existed for only three years and comprised about 20 members. Their inactivity was evident from their budget of only 3,800 guilders.

Other committees had much more money to spend, receiving about one million German marks a year in the late 1960s and early 1970s, and Horstmeier discovered that it was the GDR who provided those funds. This had been suspected for years, but nobody could prove it and the committees denied it. ‘I can prove this now’.

Finding the evidence wasn’t easy, though. ‘While most of the Communist Party’s archives still exist, almost all their financial documents have been destroyed. A lot of material from sensitive periods still exists, but these documents have disappeared’. 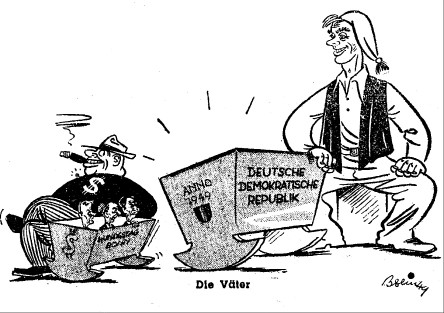 For a year Horstmeier made the archives of the former GDR his home and hunted for bits and pieces of evidence. ‘I went to the archives every day. In the morning I went to the GDR’s Foreign Ministry and when they closed in the afternoon, I went to the Communist Party’s and stayed there until the early evening.’

They paid the odd foreigner

One of the most surprising finds was how secret everything was. The GDR government even paid the odd foreigner – as was the case with the General Secretary of the Belgian Friendship Committee. ‘I talked to her husband and he didn’t even know that his wife’s salary had come from the GDR.’

Horstmeier started to think about his own country, the Netherlands. ‘If they – the GDR – did it like that, how did we do it?’

Former GDR politicians often accuse the West of being no different to them. Investigating how the Dutch ‘did it’ might be a future project now that his PhD thesis has been printed and is awaiting its first reader.