Frans de Waal: ‘Not even morality is uniquely human’

The Stadsschouwburg was almost sold out on Monday evening. The reason: famous primate researcher Frans de Waal lectured on morality in animals and argued humans are 'just' apes.
By Christien Boomsma

The Stadsschouwburg is packed on a Monday night. Even the balconies are filled with people waiting for the man that has been named one of the most influential scientists of this age: primate researcher Frans de Waal.

De Waal was invited by the Faculty of Philosophy to celebrate their 50th anniversary as an independent faculty. The topic of his presentation is one of his favourites: morality. He wants to convince his audience that not only humans have morality – animals do, too.

That is to say, evolution has provided them with all the building blocks that are necessary to become a moral being. And that means that morality is not some thin veneer on top of innately ‘bad’ human nature, but something that is deeply inherent in almost every living creature.

He plays to the audience as the experienced and eloquent performer that he has become after years of popularizing his groundbreaking research. Jokes are made at exactly the right moments and he also incorporates short videos, ranging from hilarious Monty Python clips to endearing elephants saving a baby in distress, to break the tension when things are bordering on boring. However, the message De Waal is sharing is clear and significant: humans are not as unique as they often think they are.

Planet of the Apes

De Waal was the first researcher that proved that apes were capable of empathy. They reconcile after a fight: the gesture that De Waal observed the animals making back in 1979 has been used recently in Dawn of the Planet of the Apes. ‘When Hollywood uses it, it really exists’, De Waal says, jokingly. After that first sighting, it has become clear that reconciliation is in fact extremely common among animals. ‘Even goats do it. Give me a social animal that doesn’t reconcile’, De Waal asks the crowd.

Next, he goes on to show that animals are empathic. They are affected by the emotions of other individuals, and many of them are also capable of seeing things from the perspective of the other. Apes share food when they have a lot of it with their partner in another cage who doesn’t have anything.

They console the loser after a fight and they are extremely indignant if they feel they are treated unfairly, such as when one ape is awarded a grape for giving a rock to the researcher and the other ‘only’ receives a piece of cucumber. They are capable of planning ahead, grasping complex situations and help each other.

It’s not only apes that are capable of these actions, De Waal demonstrates convincingly. It goes for elephants, too. The mirror self-recognition test is key. In the same way that children’s ability to see things from the perspective of others seems to coincide with the moment they recognize themselves in a mirror, animals that pass the mirror test seem to be able to do the same. ‘It is the general history of my field’, he says. ‘Researchers say only humans can do this. And five years later, no one talks about it anymore.’

So could it be that true morality is the last ‘human’ trait that we cannot find in animals? After listening to De Waal convincingly make the case that humans are apes among the apes for an hour, it’s hard to believe that any longer. And what is morality, really?

It is a sense not only of what is, but what ought to be, says De Waal. And many animals have that sense, for example when the hierarchy of an ape colony is challenged by one individual disobeying the leader. What follows is punishment and a return to the old hierarchy. Harmony is disturbed when the monkey has unfairly been given a cucumber, so he protests so that everyone can return to the old state of harmony.

Does biology ‘do’ morality? Not so much. Nature doesn’t apply special moral rules, yet that sense of what ought to be is clearly there, De Waal argues. ‘Humans and chimps show very similar reactions’, says De Waal. ‘My guess is the psychology underneath is the same, too.’ 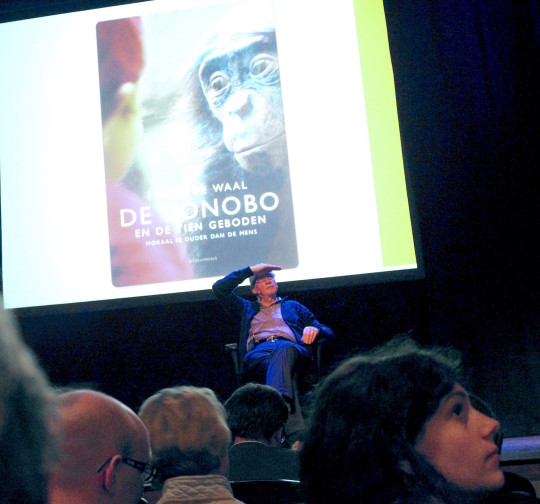