An army of food savers has descended on Groningen. Students and residents are mobilising for a battle against wastage.
By Melanie Wimmer

When Psychology student Ritwik Swain started his Facebook page for sharing food that members didn’t or couldn’t eat, it did not need much promotion. The page now has over 770 members and its membership is still growing.

Users offer anything from jam and cereal to apples from their parents’ garden and freshly grown lettuce or mint. ‘Great idea! I hate throwing food away. I always feel really guilty about it’, posted one of the users after the site’s creation.

‘I always feel guilty about throwing food away’


Ritwik really wants to bring about change when it comes to food. He himself tries to waste as little as possible, for example by making dishes last longer by using a lot of spices. He wasn’t surprised that ‘hippies, leftists, greens and hipsters’ liked the food sharing idea he had picked up from a page for Maastricht.

However, despite the great number of users, there is not much activity on his site. Ritwik remains optimistic, though: ‘Food sharing is plan B. Plan A is not to waste food in the first place, but if you end up making a mistake, you can share it.’

Wout de Moor has a totally different approach. Last year in June he founded MOOR or LESS, his own ‘inbreng restaurant’ (literally translated, a contribution restaurant). 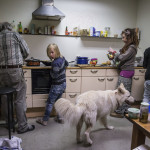 As an enthusiastic father and amateur cook, he used to help organize and set up everything for parties in the school yard. Two years ago, however, he had a terrible accident. He broke his neck, suffered brain damage and his left side was paralyzed.

Now he has recovered as much as he ever will and lives in the Biotoop of Haren, the University’s former biological centre, which is rented out to 150 people, mostly artists and students. He has accepted that he will never be able to fully work again, but he can cook a few days a week.

He thought of the restaurant idea after attending the monthly meetings of the residents, which always involve barbecues and camp fires. There too, people bring their own food. Now Wout invites people at least once a week to his flat or an outside terrace around a fire to eat together. ‘It really works. The customers bring the ingredients and help out, and I contribute my knowledge.’

Residents also grow their own vegetables, which are used for meals. ‘People contribute all kinds of food, so I have to invent new dishes every time’, says Wout happily.

Lena Scholz, a 22-year-old Psychology student from Germany, has found yet another way to prevent food from being wasted. Her friend from Dresden inspired her. As a ‘food saver’, her friend picks up food from supermarkets that can’t be sold because it has passed its sell-by date. She then shares it under the umbrella of the German Lebensmittel retten (food saving) initiative.

Founded in 2013 by Raphael Fellmer, who is famous for living without money and for campaigning against food wastage, it has become a trend across Germany. Now Lena wants to introduce it in Groningen. ‘We are throwing away too much. We need to be more conscious of food wastage’, she says firmly.


She’s convinced students will be interested. ‘We want to appeal to those people who appreciate that the food is still edible.’ She has set up a Food Savers Groningen Facebookgroup and started working on the idea with five other RUG students. Her first target? The University’s 400th anniversary events, where she expects a lot of leftovers.

Lena plans to use Ritwik’s Facebook page as a tool to share the food she collects from the University. But she does not only want to distribute the food. ‘Food saving fills a gap. We don’t want to compete with food banks or soup kitchens. Our goal is to let as little food as possible go to waste.’

There are still some hurdles to be overcome, though. The group is still looking for sponsors to pay for extra fridges and space to store the food, as well as petrol costs and a bakfiets  (delivery bike) for transporting it.

They also need advice from law professors about the legal situation. In the Netherlands supermarkets are not allowed to give away food that has passed its sell-by date to organizations or food banks. However, a lot of food is still perfectly fine. ‘For example, when there is one mouldy orange in a bag, but the others are still good’, says Lena.

German law does allow supermarkets to give away such products to private individuals. ‘It’s like when I make jam for you as a present, but it has gone off and you fall ill. It’s bad luck, but you can’t sue me’, Lena explains.

Maybe this concept will also work in the Netherlands. Preventing food waste is realistic. It’s not like saying I want to stop climate change.’