Krenz unbothered by his critics

The Berlin Wall fell 25 years ago this month, and with it, the Cold War effectively ended. But for Egon Krenz, the final leader of the German Democratic Republic party, the east was doing what they thought was right.
By Traci White

For Andreas Blühm, the director of the Groninger Museum, Krenz’s presence in Groningen is wrong. He has publicly stated his criticism of Egon Krenz giving a keynote speech on Monday, kicking off a series of University events commemorating the 25th anniversary of the fall of the Berlin Wall. Blühm, who has been the director of the Groninger Museum since 2012, was born in East Berlin, and doesn’t think it’s appropriate to have the former communist as a prominently featured guest. 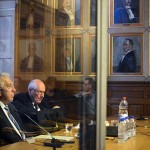 Krenz was a member of the German Democratic Republic, and took control of the party following a coup of the previous leader, Erich Honecker, in 1989. But Krenz turned out to be the last leader of the party: he came to power in mid-October, and the wall effectively fell on 9 November. Prior to becoming the party leader, he was a career politician within the GDR: in 1983, he became a member of the Politburo, the executive committee of the party in East Germany.

Krenz was eventually sentenced to six and a half years in jail for crimes during the Cold War, including the charge of manslaughter for his role in the shoot-to-kill policy at the wall. He was specifically charged for contributing to the deaths of four refugees who were shot dead as they tried to escape the East. He only served four years of his sentence and was released in 2003, and has never renounced his political views.

Krenz claimed to be unbothered by the remarks, though: he says he was invited, after all. When asked about Blühm’s accusation that he would use the speech as a platform, he said, through a translator, ‘I respect other’s opinions, even if I disagree with them, but am I expected to come here and say things I don’t believe in? If someone doesn’t agree, they don’t have to come.’

While many in the crowd didn’t agree with him, they still came. Several openly laughed when Krenz claimed that residents in the East protested in order to remain under the GDR. After assertions throughout his speech that the wall coming down was a peaceful miracle, he was questioned by Wim van Eekelen, former Dutch minister of defence, who effectively became moderator between Krenz and the critical public – how could it be claimed that no blood was shed when those who tried to defect were shot dead?

Krenz shot back that border disputes also exist in the modern era, such as Israel and Palestine, or Mexico and the United States, where people are shot dead regularly – Van Eekelen pointed out that in such cases, people are usually shot by the country they are trying to enter, not the one they want to escape.

25 Years After the Fall of the Wall

Krenz’s speech,  ‘Opening of the border and the effects thereof’ is part of the 25 Years After The Fall of The Wall, from November 3 to December 3, organized by the Centre for European Security Studies – not affiliated with the university – along with Clio, SIB and the National Fund for Peace, Freedom and Veteran Care. Also on the programme are film screenings, a master class with former military officers and a panel discussion with professors about the Cold War. Krenz’s presence signified a controversial beginning of the events series, but Van Eekelen emphasised the historical value of providing the public, especially students, with the chance to ask Krenz their questions.