What's happened in week 15? A delegation from China Agricultural University visits Groningen and the New University protests outside Starbucks.
By Traci White 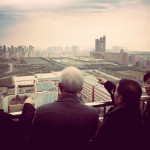 A delegation from China Agricultural University (CAU) – the institution with whom the RUG intends to start a sister campus in China – is visiting Groningen this week. The representatives from the Chinese university want to get to know the RUG and the city. The delegates, including the president of CAU, vice chairperson of the university council and the director of international relations, have been in Groningen since Sunday.

In order to give a good impression of various parts of the RUG, the guests are getting a tour of several faculties. On Monday, they visited the academic hospital, and on Tuesday, they went to the Faculties of Math and Natural Sciences and Economics and Business. They are also meeting Chinese students and employees of the RUG and UMCG. Among others on Wednesday, they will be visiting the University College and the Faculty of the Arts.

The RUG wants to start English-taught programmes in math, natural sciences, economics and business at the sister campus. But the European Language and Culture programme is also being considered.

The guests are also shown architecture in Groningen. The buildings on the campus in Yantai are, by European standards, very plain. By sharing examples like the Duisenberg building, which was completely renovated in 2010, the board of the University aims to demonstrate to their guests how the appearance of a bleak building can be improved.

‘The goal of the visit is to further work out agreements that pertain to our collaboration, as well as to give our partners the opportunity to become more familiar with the RUG and Groningen’, according to RUG spokesperson Gernant Deekens.

At the end of May, a delegation from the RUG, including the deans of several faculties, will travel to Yantai to further discuss the cooperation. Before next summer at the earliest, it will be definitively decided whether or not the sister campus in China will actually be realized. 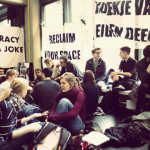 Around 30 campaigners for the New University held a lunch at the University library last week. They had planned to occupy the Starbucks, but were not allowed in.

The group had posted their plans for the open lunch on Facebook in advance. They wanted to picnic at the Starbucks to draw attention to the ‘increasing commercialization of the university and the lack of a voice for students.’ But as soon as they entered the library, the American coffee chain quickly shut their doors.

‘We wanted to go inside and drink our own coffee, and when they closed the doors, we decided to protest in the hallway instead’, according to spokesperson Floor Mertens.

The action was meant to draw more attention to the New University as well. The group wants more democracy at the RUG and is against the ‘cut-back mentality’, according to flyers provided to passers by. ‘A protest like this leads to real interaction. Students can come to us to ask what we do, and that is exactly what we wanted.’

Around 20 students who came by joined the protestors. Mertens says, ‘Students are nearly always in agreement with what we stand for when they speak with us. Everyone is positive – instructors some times more so than students. But they’re afraid to participate, there’s a culture of fear.’ Last Wednesday evening, the New University, which consists of a core of around 40 students and five lecturers, held another discussion event in the Academy building. This week, the group hopes to attract more lecturers by holding an afternoon meeting.