Finding a job in Groningen is not always easy, even for Dutch people. For internationals, there are more barriers to getting work in the north, but opportunities are there if you know where to look.
By Blanca Civit 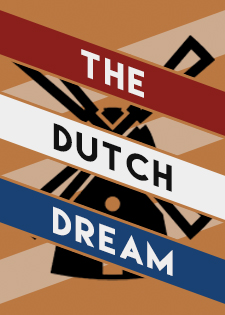 On Friday, 24 April, ESN is organizing The Dutch Dream: a career conference for all internationals seeking work.

The program includes workshops on presenting your CV and LinkedIn, as well as keynote speeches by Max van den Berg, the Dutch King’s commissioner, and RUG Professor and dean of entrepreneurship, Aard Groen.

The event starts at 9:30 a.m. in conference hall De Appel at Van Olsttoren, Zernikeplein 7. Tickets are five euros and can be bought in advance at the ESN office.

If you ask many RUG graduates about their plans, you’ll often hear a variation of this response: ‘I will move to Amsterdam, there is much more to do there.’ For internationals in particular, going to the Randstad area – Amsterdam, Utrecht, Rotterdam and The Hague – is the best option if they hope to remain in the Netherlands. Finding work in Groningen can be hard.

Adler Ferreira Luderer, a Brazilian graduate of international communication and business, headed south after searching for a job in Groningen for six months. Although his Dutch was good and he applied to many companies in the north, he wound up moving to Maastricht when he found a marketing position there.

‘I think it’s almost impossible to find a job in my field in Groningen’, he says. ‘There is a very limited amount of international companies. When I couldn’t find an offer in Groningen, I started applying to companies in the south where there is a better connection with airports, logistics and international borders. There, I found a full-time job and I didn’t hesitate a second to accept it.’

Although Adler struggled to find work, there are facilities for several major players – as well as up-and-comers – in the north. IBM, Google, Phillips, Siemens, ISG, Campina, Tvilight and Storm Marketing all have branches in either Groningen, Drenthe or Friesland.

Walter Petretta, an Italian graduate of the computer engineering master’s at the RUG, found work at one of the international companies in the city. He got hired at IBM Groningen right after finishing his thesis. ‘The University was offering positions for young talents at IBM, so I decided to apply. After passing several tests and interviews, I got the job and I decided to stay in Groningen.’

Job offers for internationals in Groningen and the northern provinces are often from certain fields of expertise: IT, water technology, dairy production, gas and energy, medical research and science. So for graduates in those fields, the odds are better that they may be able find a job.

But the biggest employers in Groningen are connected to higher education. Between UMCG and the University, the RUG has more than 16,500 employees, and the Hanze University of Applied Sciences has 2,700 staff members, many of whom are international. Vacancies at the RUG and the Hanze are often published on their websites, but having contacts at the schools can be helpful for finding work in Groningen.

But what resources are there at the University itself for job seekers? For recent and soon-to-be graduates, NEXT and Careers Company in the Faculty of Economics and Business are two services available at the RUG. They organize CV and cover letter writing workshops, show students how to use LinkedIn to find a job and coach them on how to have a successful job interview.

Starting a business is also an option. The RUG has its own Centre of Entrepreneurship and participates in the VentureLab project, a business accelerator programme for start-ups of the North. The LaunchCafe and MediaCentrale are available for entrepreneurs and young freelancers to establish relationships with existing companies and collaborate on projects.

Another resource is the International Welcome Center North. In their new municipality office on the Gedempte Zuiderdiep, they help internationals living in the north of the Netherlands both with services and other administrative needs. As for online tools, Yacht and Noorderlink are two sites with more internationally-focused vacancies.

Despite all the channels there may be for job seekers in the north, one thing is certain: you’ve got to speak some Dutch. The possibilities in Groningen can be reduced drastically if a job seeker hasn’t seriously worked on their language skills. Applicants should have an upper-intermediate level (B2) of Dutch fluency in order to be able to have a professional interview in Dutch, and being ‘Dutch-friendly’ is often a requirement for consideration as a job candidate.

Michiel Kasteleijn, business manager at International Welcome Centre North, and Hoang Cong Nguyen, a career advisor at NEXT, both work to help internationals find jobs in the north. Here are some tips they share with job seekers for finding work:
Tweet
« vorig artikel volgend artikel »

Value of a bachelor's degree