The University of Groningen has extraordinary talented people, says dr. Ronald Holzhacker. 'We need to utilize this to drive the quality of life in Groningen and the Northern provinces.'
By Ron Holzhacker

The 1978 American film ‘Animal House’ makes fun of student societies creating havoc in college towns.  On the other hand, British costume dramas filmed at Oxford University, invariably show  college dons at the high table in long black gowns, clueless about life beyond the campus walls. ‘Town and gown’ expresses the complicated relationship between the life of students and professors in the Ivory Tower and the town and region in which they are located.

Universities need to continually try to bridge the gap between town and gown. Public universities have a special role toward the societies that support and nourish them. The legitimacy and political support of these institutions rests not only on their international and national profiles, but their service and engagement with their local communities.

What could be done to strengthen the connection of the University of Groningen to the community and region?  How do we contribute, for example, to quality of life issues, to building trust across communities, encouraging tolerance and diversity, seeking better health outcomes, considering an aging population, improving economic development, exploring future transport options, or promoting responsible energy production in the region?  There is a renewed focus at the university to better translate our research results in a wide variety of fields in a way that is useful for policymakers and understandable to the public, to assist them in considering options and making better choices toward the issues confronting the region.

Often it is helpful to design valorization into the process of research at the beginning.  I was very impressed when I first came to the Netherlands with the weight which is given in research applications to the question: what is the scientific and social significance of the research question?  We are forced to explain the social relevance of our research very early in the process. It is very helpful to consider valorization not only at the end, when the results of our research are in, but at various stages of the research process. 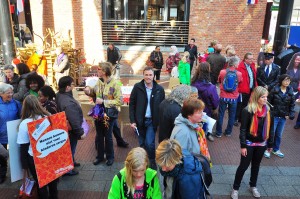 Ronald Holzhacker (in the middle) during Diversity Day

I would like to share some recent valorization activities that I was involved in, which allowed me to step off of the Ivory tower for a morning of engagement with our community, the city of Groningen and the broader 3 Northern provinces of the Netherlands.  I have been involved the past two years with Diversity Day Groningen. The day brings together policymakers, academics, leaders of civil society organizations, and the broader public to discuss diversity, tolerance, and acceptance in the community.

The day begins with a presentation and round-table in the morning, and then continues all afternoon with a festival on the Waagplein by the City Hall. I was one of the original initiators of the idea, and approached the director of the Discriminatie Meldpunt Groningen office, Sanne Smid, a few years ago to develop the idea further.  Through the great efforts of the Meldpunt and the many volunteers over the past two years, this has now grown well beyond my wildest dreams.

I had been working closely with the European Commission, DG Justice in Brussels as part of an expert network on anti-discrimination.  We were tasked with monitoring the implementation of the EU’s anti-discrimination directives in the member states. I helped organize and spoke at best practice exchanges between governments across Europe, and stressed that if real societal change is to take place in the area of diversity, it is necessary to move beyond policy making in the ministries in the European capitals. We needed to begin to implement policy and promote activities with a deeper level of social engagement in our local communities.

A recent institutional innovation of the Netherlands was an excellent example to share with other countries, the national mandate that each town and city in this country needs to create or contribute toward a local discrimination complaint office, a ‘Meldpunt.’ These offices either encourage mediation and  reconciliation between parties, or helps prepare cases to be considered by the Dutch Equality Commission, now the Netherlands national human rights institution (College voor de Rechten van de Mens).

After this engagement at the EU level, I was inspired by the motto ‘think global, act locally.’ I needed to try out these processes, to get the ball rolling in my own community, where I live and work as a way of getting to know my new community better. I chose to live in a multi-cultural neighborhood in Groningen, and I interact daily with many people from across a wide range of communities. Thus, I wanted to bring my academic knowledge to help civil society organizations build bridges and create coalitions in Groningen.

Groningen has a rich network of civil society organizations, many formed around the sharing of a common identity, such as ethnic organizations, religious organizations, disability organizations, LGBT organizations, women’s groups, etc. I wanted to find ways to release the rich social capital of these close knit groups, by helping them to build bridges across their identities to increase their influence on the broader society.

With Diversity Day Groningen 2013, we wanted to first reach leaders of these groups with discussions about bridging, multiple forms of discrimination, and work place experiences.  This was the elite, leader based part of the strategy, which might be compared to the former Dutch ‘pillar’ structure of encouraging elites and activists within organizations to be tolerant towards other groups. The second strategy focused on the broader public. Much communication and awareness raising by anti-discrimination institutions is focused on those most likely to be discriminated against, less is focused on reaching the broader community.

So we wanted to turn our attention to the community to underscore that anti-discrimination measures are an obligation, as well as a benefit, to us all.  First we stress that we all have a legal and moral obligation to not discriminate against others, secondly, that there are benefits of living in a vibrant and diverse society, and thirdly, that anti-discrimination protects everyone, because each of us has an ethnicity, a gender, a sexuality, a religion or belief, and that we may suffer a disability or get old in the future.

At Diversity Day Groningen 2013, during the morning session on October 4, first RUG Prof. Sabine Otten spoke about her research on diversity in the work place, and her conclusion that diversity works but that you have to work at it to realize the full benefits for individuals and for the organization.  During a round table session after the lecture, Han de Ruiter, Board member of the Hanzehogeschool, was asked about the Hanze’s policy toward diversity and inclusion.  Mr. de Ruiter talked about the Hanze’s policy of ‘active tolerance.’  He said that this means the Hogeschool actively intervenes, discusses, and encourages tolerance toward others.

Afterwards, I spoke to him about the special role that RUG and Hanze have in this regard in the north. Both institutions draw a diverse student body from across the Netherlands and beyond, making the student body perhaps more diverse than the Northern provinces in which these institutions are located. I believe this gives these institutions a special obligation to learn more about the experiences of these students in the city and at the university. This takes active outreach by these institutions, because the experiences of these young students in their new environment can be considerably different than their Dutch professors and administrators. 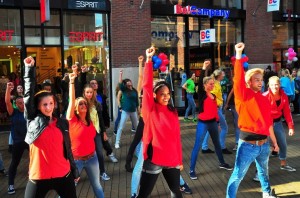 RUG recently has expressed a renewed emphasis on valorization of research – bringing the results of our research to a broader audience.  This is an important role of a public institution; one supported by the people and dependent on them for continued support. I believe part of this valorization effort needs to be focused on the Northern provinces.

University of the North

RUG over the past years has cultivated an image as the University of the North, deserving of political support from the three provinces of the North. Much of the research of RUG is fundamental scientific research, or research of relevance to the Netherlands or to the international community as a whole. But part of our duty is to also consider research and valorization activities that enrich life in this region.

We have extraordinary talent here at the University of Groningen, and we need to utilize this to drive the quality of life in Groningen and the Northern provinces. I am glad that RUG staff was involved in Diversity Day Groningen the past two years, and we should continue to strive to increase the involvement and engagement of the university with diversity issues in our community.

Dr. Ronald Holzhacker is senior lecturer at the Faculty of Arts, International Relations