Athlete and RUG student Thijmen Kupers won the 800-meter event in the Dutch Indoor Championship on Sunday afternoon. With a time of 1.46:21, he stayed generously ahead of the competition and qualified for the indoor World Championship in Portland. But he isn't going: his focus lies on the European Outdoor Championship and placing for the Olympic Games.
By Koen Marée / Translation by Mina Solanki

Kupers dominated the competition and extended his reign as the Dutch 800 meter winner, leading the pack from the very start. The other five finalists, which included three teammates, did not manage to overtake him. Kupers had actually wanted to run faster than his time of 1.46:21, the second fastest indoor time ever in the Netherlands, but in the lead up to the tournament, he wasn’t feeling as if he was in top form. ‘Those few percentage points make the difference.’

Last summer, he graduated from his bachelor in movement sciences. In September of this year, he wants to start a transition programme into the master’s degree in human machine communication. Before he gets to that stage, everything is about his sport: athletics. ‘But I do notice the itch to get back to studying. It makes me calmer in the competition season, but outside of that, I like looking back each week at what I’ve learned.’ 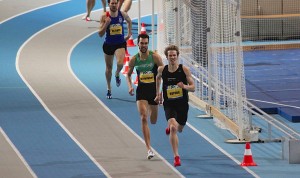 He does most of his studying at the athletic track in the form of training by getting stronger and refining his technique. The Dutch Championship was just a checkpoint on the way to his goal: achieving a medal at the European Outdoor Championship and participating at the Olympic Games this summer in Rio de Janeiro. ‘Unfortunately, that is why I am cancelling going to the World Championship in Portland. Ideally, you want to run every race, but you have to choose peak moments. Otherwise, you don’t give your all, only half. Moreover, the most attention is paid to the outdoor season in athletics.’

He was already close to the Olympic qualification standard of 1.45:20 last year. With a time of 1.45:28, Kupers was eight hundredths of a second too slow. ‘I just have to reach the qualification standard early in the season, and then the race to get there does not have to be at the expense of the European Championship. A finale at the Olympic Games will be very tough. That also depends on my progress. I think that I can get closer to 1.44, but then it’s a question of whether or not that is enough.’

‘One year ago, I did not speak to anyone about times and record lists’, the 24-year-old says with a laugh. ‘It is definitely too early for the Dutch record of Bram Som, which is 1.43:45. I am now sixth on the list, but I certainly have to move up a place – otherwise, I won’t qualify for the Olympics.’ This week, Kupers is taking it easy, but next week, the training intensity will increase. He is on the hunt for qualifications, (personal) records and, ultimately, medals of honour.