Inside Llewyn Davis describes a week in the life of a folk singer trying to break through in the 1960s. George Welling has done his fair share of gigs too, but now he earns his living as a senior lecturer on information science.
By Tim Bakker

Singing in the smoky Gaslight Cafe in New York City in the early 1960s, mostly to regulars, Llewyn Davis, a Dave Van Ronk-like folk singer, wants to make it big. Until then, his only concerns had been to play music, find a couch to crash out on and some spending money. George Welling admits that his early years as a student were all about music too. ‘I also slept on couches in between gigs around Haarlem. The difference was that I had a very small room in Amsterdam.’ 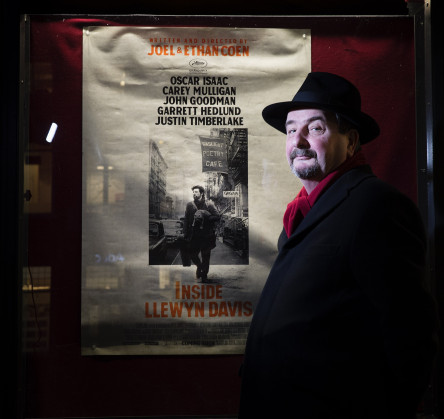 Llewyn Davis is not the easiest of guys to be around. Because of his temperament and unpredictability he has no real friends and a difficult relationship with those who barely accept him. It doesn’t really help in a world in which being liked by the right people might just enable you to achieve your goals.

Hoping for a record deal

He hitchhikes to the other side of the country, hoping to get a gig or maybe even a record deal, but it’s all in vain. ‘It makes all the difference if you know the right people’, says Welling. ‘In 1974 I took part in a talent show called Cabaret der Onbekenden (Cabaret of the Unknown) and my brother knew Peter Koelewijn and another member of the jury. That’s how I made it to the finals.’

Even then, though, that was no guarantee of success. ‘I finished ninth of the 10 acts, and the guy who finished last was the only one to make a career in music. My biggest YouTube hit had about 1,900 views.’

When the Coen Brothers make a movie, you can expect some typical jokes. Davis’s partner committed suicide, but the classic fat bad guy, John Goodman, manages to make a joke out of it. At some point Davis is turned down by Grossman, a manager who doesn’t see him as a big enough earner. ‘Bob Dylan’s manager was named Grossman too’, says Welling. He wasn’t the warmest of guys, but he did have an amazing way with money. As for the guy taking the stage after Davis? ‘That was in fact a young Bob Dylan playing one of his first gigs.’

Davis doesn’t care and Dylan is only visible for a couple of seconds. It’s typical of a Coen Brothers antihero; always painfully close to success.

‘It is nice to see that they have an eye for detail. The guitars they used were typical of that time, as were those beautiful cars.’ The Coen Brothers are well known for their movie soundtracks and Inside Llewyn Davis has one too. ‘The thing that bothered me a little, though, was that whenever a song started, the sound changed to a smooth studio sound. That makes it seem less natural. However, I really liked the fact that they used an actor who knew how to play the guitar. If actors don’t know, you can tell immediately and that’s annoying.’

Oscar Isaac, who gives a brilliant portrayal of Davis, did in fact contribute to the soundtrack – as did Justin Timberlake, playing Davis’s annoyingly happy and successful counterpart. Altogether it was a great soundtrack for a great movie.

Yes, Jonge Harten is for you