Many students spend money to work on charitable projects abroad, but why would you pay to go do good? Who profits the most?
By Verena Rendel

Garima Raghuvanshy, 22, is happy. This weekend, the Indian student hosted her first fundraising dinner for ‘Project Zambezi’. She only has 800 dollars to go before she and her friends – Yuchen Wu, 23, from China, and Karlijn Schepers, 23, from the Netherlands – can travel to Zambia in November to build an orphanage.

In Zambia, the three Honours College students will live in a local community without electricity or running water. Instructed by local construction workers, the girls and their team will mix concrete, bake bricks and do other tasks to support the locals.

‘It’s a very challenging environment to work in. It’s very hot in Zambia during that time of year and it will be interesting to see how resilient we are and how well we can handle the situation. I think we will learn a lot about ourselves’, Garima says. 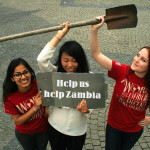 ‘Donating is not the same as actually going there, building something with your own hands’

The trip is organized by Habitat for Humanity International. In their Global Village program, they send volunteers around the world to support housing projects. Habitat states that they are supported by a million volunteers each year.

Of course Garima, Yuchen and Karlijn are not the only students participating in volunteer projects like Habitat. Young people in particular are searching for new experiences and are able to leave home for a longer period of time more easily. But it begs the question: why not just give money?

Garima has no doubts about that. ‘Donating is not the same as actually going there, building something with your own hands and seeing the result of the work and interacting with the people who are going to live in the house.’

The girls are excited to go to. ‘We want to learn about the culture and the circumstances there, but also how the charity organization and fundraising works’, Karlijn says.

Habitat for Humanity International is only one of numerous charitable organizations students can choose from to participate in a volunteer project. Habitat is a non-profit organization that operates in countries like Zambia, Nepal, Romania and Nicaragua. Their vision is to ‘eliminate poverty housing and homelessness from the world’.

For the Global Village programme, volunteers travel the world in teams and collaborate with local construction workers and the future home owner to support the building process. The teams mostly support Habitat financially: every trip includes a donation of 600 euros.

Habitat for Humanity Netherlands agrees that they could build more houses if the volunteer’s travel expenses were donated to Habitat directly, but experience shows that few people make such generous donations.

On the other hand, Esther Vos, a 24-year-old student, admits that she participated in a volunteer project mostly for herself. ‘Before graduation, I wanted to do something different to develop my leadership skills, gain a better cross cultural understanding and, at the same time, have a positive impact on society.’

Donating was not an option

This summer, Esther, who is studying marketing management, participated in the Global Citizen Program through AISEC (http://www.aiesec.nl/ ). For six weeks, she lived in Vietnam and taught English. Simply donating was not an option for Esther: she wanted to see it for herself and make a hands-on contribution.

For Ruben Bouwman, a 23-year-old research assistant at the faculty of spatial science, going abroad to volunteer had another benefit. ‘It’s more valuable to bring the money there yourself. It gives you more assurance that the money is spent at the right place and for the right purpose.’

Ruben volunteered in Brazil in 2009 and, together with 40 other young people, built houses for families who lost their village. The project was organized by a Christian non-profit organization called World Servants.

It was the first time Ruben had travelled abroad, which was a profound experience for him. ‘It feels good to do something for people who really need it. It gives their lives a positive influence. On the last night, we transferred the houses to the families. It was an emotional ceremony and it felt good to see the happiness in their eyes.’

It’s impossible for Ruben to say whether he did the project for himself or for the people in Brazil. ‘I really remember that it was twofold for me, but if I have to choose, I would say that the first reason to go was to help the people there. Developing myself and experiencing things was a little less important.’

‘It helps us and it helps them’

It seems that volunteering satisfies both: doing it for yourself and doing it for others. Yet volunteering purely for the benefit of others is difficult, Garima explains. ‘It’s almost impossible to have a meaningful compassion for someone whose experience and circumstances are completely different from yours, and about which you know nothing.’

She adds, ‘If I say I’m going because Zambia is such a poor country and it’s my duty to help, then that would be a lie. Our going there helps us and it helps them. If we weren’t going, I personally would not spend 6 months of time and effort on fundraising! That’s why this is more productive than just giving the money, at least for me.’