Groningen has become a dangerous place, at least for students from the University College Groningen. No one is safe: anyone can be ‘eliminated’ at any given time in a deadly serious game of Assassins.
By Nina Yakimova

‘Grandmaster Assassin’ Cairo Geha, a student in liberal arts and sciences at UCG and a member of the social committee of the Caerus Study Association, is the brains behind the game, which was popular among seniors at his high school in America. ‘We were trying to find a game or event that would get everyone in the community excited, and I randomly remembered this game’, says Geha.

Assassins is a live action – and paranoia-inducing – game designed to pit members of the UCG community against each other. Every player is an assassin, and every assassin receives human targets and attempts to eliminate them. The game runs 24/7 for the duration of one week and requires players to do a healthy amount of sneaking, planning and deceiving in order to survive and progress further.

People have been running around for a week trying to ‘kill’ each other with bibles, teabags and water pistols
The social committee organised the game and created a rulebook for how it is played. Aside from a few locations like the UCG lecture halls and classrooms, and the bedrooms of the students which are off limits, the assassinations could take place anywhere from the UCG canteen to the toilets and hallways, as long as there are no witnesses present. Strategies vary from waiting for the ‘victims’ to be alone in the open, for example by preying on targets who linger after a lecture to talk with a professor to creeping up behind them in dormitory bathrooms and bike sheds.

With three players remaining and more than 47 staff and student members who have participated in the live-action game, Assassins has been much more popular than the committee anticipated, and it seems destined to become a UCG tradition for the years to come.

The idea took the community by storm and soon everyone was playing. ‘I, personally, was one of the more passive players, but Cairo encouraged us all to play’, says Tom Barbereau, a student in politics, philosophy and economics at UCG. ‘It was quite cool as all the students played.’

UCG is one of many universities around the world, such as Duke and Cambridge, in which the game is played with multiple variations and different playing styles. The version UCG students have chosen puts the emphasis on comedy. Players are encouraged to choose their own unusual and crazy weapons. ‘As a result, members of the community have been running around for a week trying to ‘kill’ each other with bibles, teabags, water pistols, UCG business cards and many objects that are more miscellaneous’, says Geha.

The most hilarious and memorable assassination stories, photos and strategies are rewarded with extra points. The best assassins will go down in history as the first winner of the game and will have the option of joining the game design team for next year.

The most exciting aspect of the game may not even be the assassinations themselves but rather how they are depicted in the stories and photos the participants send to Geha after ‘eliminating’ a target. Below are a few particularly spectacular examples: 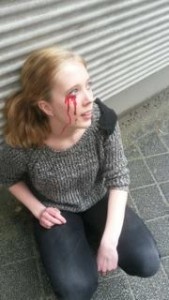 ‘While the late April rain was pouring down on my umbrella, realising I only had a few hours left before being submitted to the ‘Wanted List’, I encountered my victim. Naively innocent, not aware of the danger she was in, she greeted me cheerfully. I answered her hello with a polite smile, knowing that her end was near. While she carelessly parked her bike in the shed, I took the time to get my murder weapon ready. It was over before she noticed it. Hereby, I declare Desi Burghoorn ASSASSINATED’, writes Nora Achterbosch, a UCG student in liberal arts. 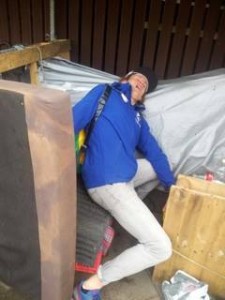 ‘As the other students slowly went home, Dennis stayed behind forgetting his vulnerability. He talked and talked and talked… an annoyingly long 20 minutes he kept talking! The conversation made him want to re-evaluate his life, thus he went to his favourite spot at UCG. Little did he know his day would end here. Dennis Pinksteren got TEABAGGED’, Lieke Heupink, a UCG student in health and life sciences, explains her assassins’ attack. 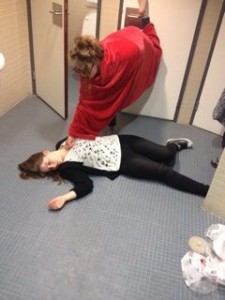 ‘The scent of blood was in the air – it was nauseating to the living and promising the imminent arrival of a new member to the dead. ‘I’m going to the toilet. Do what you have to do’, she said while I was merrily chopping carrots. I put the carrots aside and sharpened my knife. The sound of it sent a shiver down the spine of even the most vicious murderer. I left the kitchen, making long, soundless steps toward the bathroom. When I heard the toilet flush, I prepared my position, blocking the exit. There was no escape for her. She opened the door and we were facing each other. ‘It’s not going to hurt’, I said, and then I stabbed her in the chest. I was quick and proficient. Anne de Vries did not make a single noise while falling towards the floor’, Nikolett Angyal writes in her assassination story.

Praying in the library?

Hangover cure in a box