Particle shower from close to home

According to particle physicists writing in Nature, super fast particles that bombard the earth mainly originate from our own galaxy. But what has made them so fast remains a mystery.
By Christien Boomsma / Translation by Sarah van Steenderen

Astronomers have been racking their brains about it for years. Where do these mysterious high-energy particles that regularly hit the earth come from? Could it be supernovae? Did they get their speed from a supermassive black hole? Nobody knows. But one thing is certain: their origins must be special, because otherwise they could never have so much energy. They are approximately one hundred thousand times as fast as the speeds that CERN can reach with the Large Hadron Collider.

KVI-CART particle physicist Olaf Scholten is one of the people who solved part of the mystery, together with physicists from Nijmegen and Brussels. By cleverly using the radio antennae at LOFAR near Dwingeloo, he was able to discover that the particles most likely originate from our own galaxy. And that is surprising. ‘Until now, we had assumed that they came from far away in the universe.’

‘Until now, we had assumed that they came from far away in the universe.’

Studying high-energy particles is no simple task because they do not actually hit the earth that often: the fastest ones hit one square kilometre once every hundred years. The slightly less fast ones might come by a bit more often, but that is hardly a bombardment.

The second problem is that they never reach the earth in one piece. As soon as they hit the atmosphere, they collide, which creates others particles that race on at enormous speeds. This creates a cascade of particles – a shower – which gradually loses energy until it fizzles out completely. 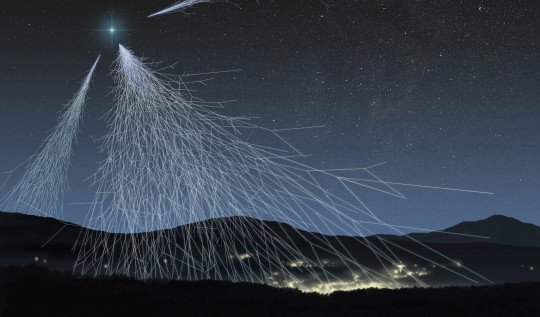 Particle physicists study this ‘shower’ to figure out where that first interstellar particle came from. ‘But what we are really intrigued by is that particle cascade also contains electrons and positrons’, Scholten explains. ‘And they send out a radio pulse. A ‘ping’.’

And everything revolves around that ‘ping’. Scholten and former KVI colleague Stijn Buitink – who now works at the Vrije Universiteit Brussel – decided to use the LOFAR antennae, which are set up on a ‘super terp’ in Dwingeloo that measures 300 metres across.

By combining the signals from different antennae after a particle shower, the researchers hoped to not only determine which surface had been hit, but also at which height the cascade had reached its maximum. ‘You can compare it to a flashlight’, says Scholten. ‘The higher you hold the light, the wider the light beam.’ 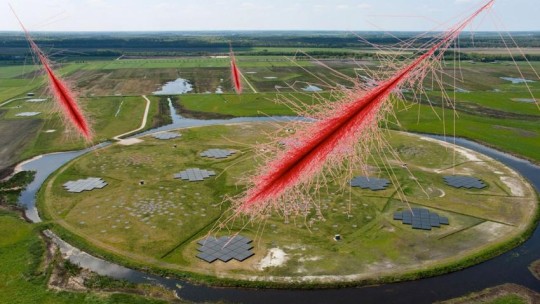 It quickly proved a success: during 150 days of observation, they measured 118 showers. ‘It worked even better than the traditional camera method that the Auger Observatory in Argentina uses’, says Scholten. ‘You can measure radio signals 24 hours a day, and Auger only works during cloudless nights.’

Next, the researchers tried to figure out what kind of particles were causing the shower: were they mainly iron or carbon atoms, which are very heavy, or rather helium and protons, which are much lighter? That’s when the real surprise happened: ‘We were mainly expecting to find light particles – because particles from other galaxies are quite light – and a lot of heavy cores. But what we found were mainly particles with a medium mass’, says Scholten. ‘That means that they come from our own galaxy, and not somewhere from Nowheresville.’

‘The super fast particles come from our own galaxy, not Nowheresville’

But where exactly do they come from? What is out there in our galaxy that is capable of giving a particle so much energy? Scholten does not know. Our galaxy does have a supermassive black hole, but other galaxies have those as well. ‘And then you’d expect more of these kinds of particles ‘from outside’.’ It is also possible that a particle that has been sent out by a star ‘colliding’ with a gas cloud, which gives it extra speed. ‘Like a tennis racket’, speculates Scholten.

But, he warns, it is all just guesswork. ‘We have researched the particles and this is what we found. Now, the international community can get to work finding an answer to the second part of the mystery.’