Coming from Holland, there were many things in Cairo that I needed to get used to. In general, I adjusted pretty well to everything (‘elhamdulillah’ – thank God). But there is one thing that I have a hard time getting used to: the police and the army. Besides the fact that the streets are loaded with army personnel and policemen, there are also stories about violence perpetrated by them that sometimes make me sick.

People should know that the army and police in Egypt differ from those in Holland in many ways. To illustrate a few basic differences: on my way to school, I pass several checkpoints occupied by men in black wearing helmets, bulletproof vests and carrying AK 47’s. Besides the checkpoints in the streets, there are other larger checkpoints in popular places for demonstrations (like Tahrir Square). Especially on Fridays, those places are loaded with tanks and heaps of barbed wire to crack down on any possible demonstrations.

Demonstrations in Egypt often arise after the Friday afternoon prayer. This is a time when people get together to pray. If a demonstration is formed, it usually starts with a gathering of people; therefore, it is most likely to happen on Fridays. Demonstrations that the government doesn’t approve of are forbidden in Cairo and are met with brutal violence by the army and police. The ironic thing is that these checkpoints supposedly serve the purpose of ensuring security, but when walking past them, I do not feel more secure than usual. The image of a boy who looks like he may be 18 years old with a kalashnikov in his hands and his eyes glazed over is not a very reassuring one. 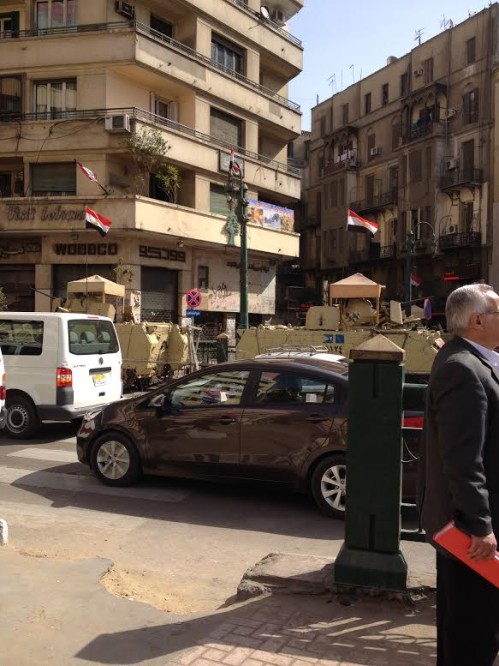 Another difference is that the police and army often do not refrain from using violence. This is illustrated by the numerous cases of police abuse. As Reem Khorshid (Cairo University student and a writer) described to me, many Egyptians have become apathetic when it comes to policemen. The struggle with the police has been there even before the revolution. She also told me: ‘I personally didn’t experience a violent situation with the police directly, but during the protests and demonstrations, one had to be really careful not to get hurt by either bullets or by falling under arrest.’ Unfortunately, police violence did not stop with the end of the revolution. For instance, a few days ago, three men were killed in Cairo all on the same day and all by police forces. And these are not the only incidents. On the past couple of days, I have heard and read about many cases like this. They illustrate the ongoing abuse by the police, not only in the streets but also in prison.

I have only been here for two months now, so I cannot give any solid explanation about the how and why of police abuse in Egypt. What I did learn is that the army and police are very big and very powerful. Since the overthrow of Mubarak, the army has ruled the country several times. And when they didn’t, the army and police have been prominent enforcers of the regime and the law. The Egyptian army can be seen as a society outside the normal society of the people, as the army has its own infrastructure and economy. It is exactly this influence and severe abuse that have led to many struggles between the people and the army/police. As Reem said as well: ‘Now, you hear lots of stories about death or torture in prisons, and more crimes are committed against innocent people which make the struggles with the police even more tense.’

It might not be the first thing that pops into your mind when thinking of Egypt, but the presence and influence of the police and army is one of the most striking things I have come across while living here. This is not only the case for me, but I think especially for many Egyptian people.

PS: no clear pictures this time, as policemen and soldiers are not very keen on being photographed. The second time I tried to take a sneaky picture, it resulted in the photograph above.