‘The Passion’: nice songs, but not biblical enough

Theology student Henk Binnekamp (21) is a fan of ‘The Passion’, the annual event on Maundy Thursday which tells the story of ‘The Passion’ of Christ. Last Friday, he gave a workshop at a secondary school student conference in Amersfoort, the city where the performance will be given this year, about the biblical accuracy of the musical spectacle.
By Anne Floor Lanting / Photo: Allegrafie / Translation by Mina Solanki

Binnekamp watches ‘The Passion’ every year. ‘I like that you can reach out to such a large audience with the story of Jesus and the gospel. On the one hand, the spectacle of Dutch pop songs and the general vibe appeal to me, and on the other hand, I personally like that so many people hear about Jesus.’

‘Too many aspects of Christianity are not included’
He did not hesitate when the Faculty of Theology and Religious Studies and the Protestant Theological University (PThU) in Groningen asked him to give a workshop at the secondary school student conference titled ‘The Passion’: What’s in it for me?’. ‘I thought it would be fun to stand in front of the class’, Binnekamp says.

The RUG and the PThU organised the conference to illustrate what the theology programme in Groningen covers. ‘With this workshop, I wanted to show pupils that theology also deals with current events and topics. Theology often has a stuffy reputation, but it’s about more than just the biblical science element’, the student explains. 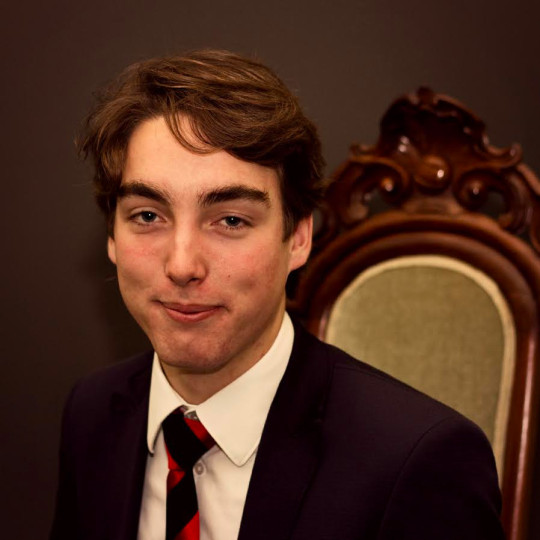 Binnekamp feels that ‘The Passion’ is an interesting topic for theologians because the TV event can initiate a dialogue about religion. ‘It is a big event in which Christianity is expressed. In the Netherlands that’s not a problem, but in the Islamic State, for example, such an event would not be allowed. What are our thoughts on religions and how should we deal with them? These are the kinds of dialogues which can be started up from ‘The Passion’, says Binnekamp.

In his workshop, which he gave together with his classmate Pieter Auke van den Berg, the focus was principally the extent to which you can bring a biblical story to the present culture, which adjustments should be made and how. ‘You have a centuries old story and then comes the question of how to make it accessible for the general public 2,000 years later, including many people who don’t have anything to do with the church anymore’, explains the theology student.

A step toward evangelisation

Although the television event spreads the story of Jesus to unbelievers as well, Henk does not see ‘The Passion’ as evangelization as such. ‘Too many aspects which are a part of the core beliefs in Christianity, are not shown in ‘The Passion’, for example the forgiving aspect of Jesus and the meaning it has to us as people. As evangelization material, it’s merely a first step’, he believes.

It does not bother him that ‘The Passion’ is a biblical story that has been turned into a commercial media spectacle. ‘It remains a biblical story and the word of the Bible is so unique that it is strong enough to be used for such an event. This way, Christianity can be presented to the general public.’ The workshop participants are not completely in agreeance with Henk: many would like to see less commercialization surrounding ‘The Passion’. ‘According to many of the participants, the story could be made shorter, which would ensure a more powerful evangelical message’, the theology student admits.

Jesus as a human being

Binnekamp attaches more importance to the manner in which Christianity is presented through ‘The Passion’. ‘It can be presented with songs, but it should have more content, in my opinion. In ‘The Passion’, we see Jesus primarily as a person, a very human Jesus, but he is also God. That should be more prominent.’

‘I would make resurrection of Jesus more prominent’
In the translation of ‘The Passion’ of Christ into modern culture, that comes with certain challenges, according to Binnekamp. ‘One element that is missing in ‘The Passion’ is that the Jews and Pharisees had a considerable stake in Jesus being arrested and convicted. That is not dealt with, and it’s a sensitive issue, of course’, he explains. ‘Different religions should be able to co-exist in the Netherlands without offending each other. This means that you have to compromise and possibly adjust certain elements.’

If Binnekamp were to write the script for ‘The Passion’, he would bring more biblical aspects to the foreground. ‘It is broadcast by Christian broadcasting companies after all, and you should therefore be allowed to stand up for what you believe in. In addition I would base it on one of the four gospels, at most two, instead of using elements from all four. In doing so, you can follow one clear story line. Moreover, I would make resurrection of Jesus more prominent’.

The workshop participants were also not completely on the same page with him regarding these ideas. ‘The participants actually indicated wanting to base ‘The Passion’ on the four gospels simultaneously. According to them, this would make for a substantial, detailed story’, says Binnekamp. The student does not have specific plans to pursue studying ‘The Passion’. The question of how biblical stories and culture conflict with each other or actually fuse together still fascinates him, however. ‘‘The Passion’ is one of the many examples of that in the 21st century.’