Some internationals are only just discovering they are victims of the wave of identity thefts that washed over Groningen in December. Because they failed to deregister at City Hall, for example.
By Traci White

Madleen Scatena is a very well-organised person: her friends pick on her for having a neon highlighter color-coded system for her agenda. But when she moved away from the Selwerd student flats two years ago, she forgot to update her address at City Hall. She didn’t know until last month just how big of a problem that would be.

In April, Scatena, German and doing a double major in International Relations and International and European Law, began working part-time. She had to get Dutch health insurance, but her boss said she would qualify for a subsidy. To get it, she needed a DigiD.

At that point, she realized she hadn’t updated her address: the activation code for the DigiD account is sent by post, and would go to her old residence. She straightened it out at City Hall and activated the DigiD account. ‘That’s when the red envelops started rushing in’, Scatena says.

The notices from the tax office came in pairs: one for a rent subsidy and one for a health insurance subsidy, neither of which Scatena had applied for. ‘They said that I have to pay off this debt within two days, and I was thinking, is this fake?’ 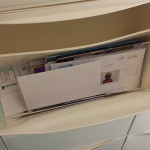 The mail in Winscho is easily intercepted


‘At first, it was demanding payment for 400 Euros, but it’s gotten up to over 5,000 Euros by now. So, I filed a report against unknown so that I’m safe if something else happens.’

Scatena is one of 100 students so far who have filed a report of DigiD identity fraud in the past year, according to Manon Hoiting, press secretary for the public prosecutor handling the case.

Eight suspects, including one employee of the Dutch tax office, have been arrested in connection with the DigiD scam. The suspects are accused of stealing mail from primarily international student housing to collect personal information like date of birth and Burgerservicenummers – BSN. The suspects used that information to request a DigiD, intercepted the activation code and applied for rent and health subsidies to the tune of thousands of Euros in student’s names.

While the policy aims to prevent future fraud, Scatena worries about other international students who may not de-register when they leave Groningen: mail containing sensitive information could still come to their old addresses and be exploited.

The International Service Desk tries to make sure everyone is informed, and the courier delivery of DigiDs seems to be working, but BSNs could still be potentially intercepted. All newly arrived foreigners have to make an appointment at City Hall to register, but their BSN is sent via post.

According to City Hall employee Roderik Cazemier van den Berg, the office is considering having internationals retrieve the BSN in person as well to make sure they get it. But it would be a logistical nightmare. ‘How can we get 4,000 incoming students into our office every fall just to pick that up? For now, sending the letter via post is the only option’, he says.

‘Don’t cancel your DigiD yourself!’

While de-registering at City Hall is required and can be done online or via email, doing so does not mean that your DigiD also automatically stops working: the account remains active for three years once it is opened. The DigiD help desk actually advises against students cancelling their DigiD account on their own.

‘If someone cancels on their own but then turns out to need it for something the next day, they have to reapply. If students have questions or doubts about whether or not they still need their DigiD account, just call us and we can advise you.’ There is information on the DigiD website in English about reporting fraud, but not for cancelling an account.

While cases like Scatena’s are still being uncovered, Hoiting says that the prosecution feels confident that they have identified all the suspects. ‘Since we got them, it’s stopped.’

But they haven’t been charged yet. ‘The police are finishing their investigation, but there’s still a lot of administrative steps before the public prosecutor will bring any charges. We expect that a hearing is still at least a few months away.’

As for Scatena, she is less worried now, although she hasn’t gotten confirmation that she will not be responsible for paying back the ill-gotten money. She is thankful for support she has gotten from friends and staff in the law faculty, but she is still left asking: ‘How could this happen?’