Vocal talent Oes sees studying as back up plan

Marloes ‘Oes’ Pieksma is a singer-songwriter of exotic Nederpop that is ‘about something’. The RUG student is also one of the 111 artists who are still in the race in Giel's Talent Contest.
By Nienke Both / Photo by Proper Dutch / Translation by Sarah van Steenderen

In her daily life, Pieksma is a master’s student in talent development and creativity, a teacher at the ACLO, a student assistant and a mother. As ‘Oes’, she is hard at work on her musical career: early this year, she signed with the Groningen record label Bankpioniers, rapper Kraantje Pappie’s label. She is also participating in Giel’s Talent Contest, the online competition where radio DJ Giel Beelen searches for new musical talent.

In a studio on the Boterdiep, Oes says that she honestly does not even like talent competitions. ‘It’s so much more about the programme than about the talent search itself. And you end up working on your own music less because you know people will be judging you.’ She decided to participate anyway, on Kraantje Pappie’s advice . The decision was made after the launch of her single Ik vind je liedje leuk (I like your song). ‘The single was doing all right, but not as well as I’d hoped.’

By participating in the contest, she hopes to reach a larger audience and broaden her network. That is working out quite nicely: ‘Giel got us a gig on King’s Day in Amsterdam and another for Liberation Day on 3FM. You can only do that with a good network.’

On Monday evening, she found out that she did not make the cut for the show’s top 25. ‘Sadly, no more Giel’s Talent show for me and my band’, Oes wrote on her Facebook page. ‘It’s a shame!’ But she will continue to fight for her musical career: ‘The battle continues!’

Before the results were made known on Monday, she said that she was not nervous, but rather excited and hopeful that the substance of her work would be enough to beat out her competitors. ‘My lyrics are strong, ambiguous and layered. They have real substance. At first, people will think: ‘Oh, that’s nice, what a lovely song!’ You don’t get the message until later.’

While most contestants in the competition sing in English, Oes stuck to Dutch. ‘I want to learn to write my own songs. Right now, I’m still collaborating with others. I think writing my own songs will be easier in Dutch. It’s easier to convey humour and ambiguous meaning in your own language.’ While she was still in the running, she tried not to pay much attention to the other contestants. ‘That’ll only make me more nervous’, she laughs. ‘I was watching them and I thought: I shouldn’t be doing this!’

Oes has been making music since she was young. She plays the flute and piano, and she started singing at 18. But when her music teacher recommended that she attend conservatory, she ignored that advice and went to university instead. ‘I thought attending a music school would be a waste of my high school diploma. Nonsense, obviously.’

The birth of her daughter brought about majors changes in her life. ‘I was suddenly stuck at home. I used to be someone who was always running around, and I thought: ‘is this it?’’ The answer was ‘no’, of course, and she decided to focus on music. ‘When I’m not making music, I’m the unhappiest person in the world.’

Oes has her study as back up, but she hopes to pay her way with music. ‘I’m responsible not just for myself, but for my daughter as well’, she says. That is why she decided to get serious about her musical career, and she has been giving it a proper go for several years now. She gave a lot of thought to her sound (‘exotic Dutch pop, with a bit of reggae, hip hop and bossa’) and getting her band together. She has recorded singles, such as Liefdesliedjes (Love Songs) and Plastic, and gained experience with her band. ‘Some of us have music training, but others, like me, are unschooled. By playing together a lot and gaining experience, you get more in tune with each other.’ 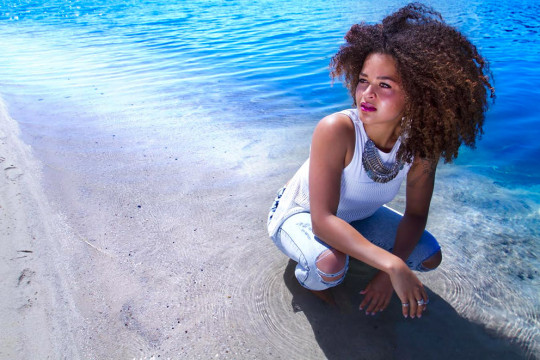 She is currently working on her first EP. The first single (‘The title is a secret!’) is almost done. ‘It really became a ballsy song. I’m so proud of it.’ Even though she did not make the top 25 of Giel’s Talent show, this will not be the last we hear of her, if she has anything to say about it: ‘I want to reach the top in the Netherlands.’