English may be one of the main reasons international students come to Groningen, but Dutch has its place, too. The popularity of the new Introduction to Dutch MOOC proves it.
By Katherine Watts

Does anyone outside the Netherlands want to learn Dutch? Contrary to popular belief, yes.

‘Worldwide, 15,000 students are studying Dutch at university’, says Berna de Boer, head of the Dutch section at the Language Centre. An additional 400,000 international students also take Dutch classes at the pre-university level across the globe.

That considerable international interest is reflected in the number of students enrolling in the new Introduction to Dutch MOOC that was recently developed by the Language Centre. There are already more than 10,000 people from around the world registered to take the free online course, which begins on 2 March. 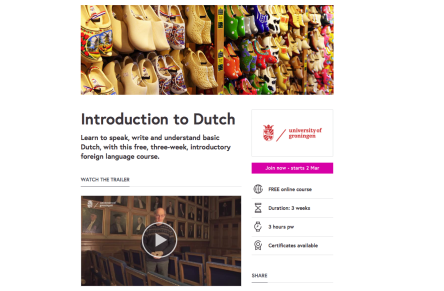 The MOOC introduces students to Dutch language and culture. It is intended for people who have little or no knowledge of Dutch but would like to learn the basics before coming to and living in the Netherlands. That means incoming international students and foreign workers first and foremost, but anyone who simply wants to learn Dutch is also welcome to sign up.

Birgit Lijmbach, a lecturer in Dutch for non-native speakers, is one of the educators involved with the MOOC. She says that it is good for people who are considering coming to the Netherlands and hopes the course will make it easier for incoming students to acclimate. The MOOC will be ‘a mixture of an online course and a lecture’, Lijmbach says. Students can work interactively with their fellow classmates following the course, and students have up to three weeks to complete the exercises.

Is it worth the effort to learn Dutch? Both De Boer and Marcus Grollman, head of the English Section at the Language Centre, firmly believe it is. ‘Every language is worth learning,’ De Boer says. If you don’t learn the language of a country where you will be living for a long time, ‘you miss out on a lot.’

Students taking the University of Groningen beginners Dutch language courses agree: if you don’t speak Dutch, you do not learn as much about Dutch culture and you don’t have the same kind of contact with Dutch people as you would otherwise.

Maria Epifanove a 22-year-old Russian student of International Business, says that she studies Dutch at the RUG because it is important to learn the language spoken where you live. She sees that if you speak Dutch, people will react differently to you. ‘Every language is special. If you live in this country, you need to speak the language – you really need to show you appreciate this culture.’

But do students gain more advantages by learning English rather than Dutch? Grollman thinks not: ‘To fully “integrate” into a country, one needs to know the language, at least to an efficient communication level.’ He acknowledges that English is crucial, especially for master’s students and PhD candidates – many of the higher level degree programmes are only offered in English.

‘If you live in this country, you need to speak the language – you really need to show you appreciate this culture.’


Still, knowing at least some Dutch is also useful if you want to find a job. Ohla Stelmakh from Ukraine experienced that herself. The 21-year-old bachelor’s student of International Business says that she is studying Dutch now to improve her chances of future employment, but has been rejected for some part-time vacancies because she couldn’t yet speak the language.

Since so many people speak English, it can be hard to practise your Dutch. The beginner Dutch students can confirm that, even though they understand that the Dutch people mean well.

‘They don’t understand that you want to practise’, Olha says. ‘They’re trying to make it easier for you.’ One way of letting people know you want to speak Dutch is to get a Spreek Nederlands met mij! badge from the desk at the Language Centre.

The Board of the University is making it a priority for internationals to learn Dutch. In January 2013, Dutch language courses up to A2 were made free for these students, and as of January 2015, that level has been increased to level B1. As for other online language courses, the Language Centre is also considering developing an English-taught MOOC for learning Frisian.

'Embrace diversity at the RUG'