The dull clunk of plastic wheels over cracked concrete was the only company many internationals - including your author - had upon arriving at their new international homes. Where’s the welcome party?
By Dan O'Neill

The front door, wedged open by a clearly underutilised broom, led into a hallway more cluttered than the so-called ‘bike shed’ outside. Post covered the floor, stains covered the kitchen and, naturally, two locked bikes were parked in front of the fridges.

This place was once a hospital. I lie awake some nights contemplating how many people have died in my room.

The lack of on-arrival welcomes for internationals in Groningen struck me after returning from America as an exchange student. There, a student from the university greeted me at the airport. She picked me up on behalf of Easing Abroad Students Entry (EASE), a student-run organisation at the University of North Carolina at Chapel Hill.

This service was offered automatically to incoming exchange students. My mentor inquired about when my plane would be landing so that someone would be there to pick me up – at 11 p.m. She drove me around campus, made sure I was fed and brought me to my new home.

Shouldn’t Groningen’s internationals have someone to greet and guide them from the airport, train station or – in the case of Germans – border to their house?

Erin Guderian, a 21-year-old American student of Environmental Science, wishes a welcome committee had been there to greet her after a tough journey alone. ‘I would’ve felt much more welcomed if someone had met me when I got off the train’, she says.

For Felicitas Schierle, an 18-year-old German-American student of International and European Law, lack of an on-arrival welcome didn’t matter. Schierle says her faculty helped her through the integration process, but Simina Peterfi, an 18-year-old Romanian student of International Business, feels that some students get different information. ‘One of my friends had a buddy system, but I didn’t know that there was such a thing’, she says. ‘It wasn’t advertised.’

‘I would’ve felt much more welcomed if someone had met me when I got off the train.’


ESN does something similar to EASE through its mentor programme, ‘which includes a possible pick-up at the central station’, according to the board. This is the only information they offered. Representatives of SSH Groningen say they arrange on-arrival welcomes through ESN in most Dutch cities, but not in Groningen yet.

As for the University, there is a lot of communication with incoming international students prior to their arrival – but it still needs some work.

The Welcoming Ceremony is the main formal welcome by RUG officials to internationals, but EU students may choose not to attend an event a week before classes begin and visa issues force some non-European students to miss out. 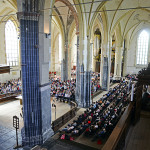 Before SSH took over, internationals could show up throughout the year and that made organising on-arrival pick ups difficult. Now, students can only arrive once their rental agreement has started, but that brings with it another dilemma. Rental agreements for exchange students last from 1 February to 30 June, and those who want to be here before the contract begins have to dish out extra dosh.

This is exactly what Pinja Raivonen, a 25-year-old International Business student from Finland, did. Because the Welcoming Ceremony was on 29 January, she had to stay in an expensive hostel for three nights before she was allowed to enter her SSH accommodation. ‘In the future, the University should not place these things so far away from each other,’ Raivonen says. ‘It costs a lot of money’.

As for the remaining information on how to get settled, the International Service Desk organises a special immigration day for non-EU students where representatives help them with things like resident permits, visas, and registering with the Gemeente. But before the students arrive, the only information non-EU students get about Groningen is limited to instructions on how to travel from Schiphol to Groningen. Once they arrive at the Central Station, they’re on their own.

‘The University should not place these things so far away from each other. It costs a lot of money’.

Matt Brookes, an Economics student who is also from the United States, says the information he received from the International Service Desk was ‘minimal’. ‘I got a lot of the information on travel from my school back at home’, the 20-year-old says.

‘There are so many different student buildings that we expect SSH to handle travel matters or the faculty’, ISD team coordinator Swaeske de Vries says. ‘SSH is responsible and have the details of all the students renting with them, which we don’t have. It’s a grey area.’

The International Student Barometer from Autumn 2014 states that the RUG is first place in the Netherlands when it comes to formal welcomes. In order to address Groningen’s lacking informal welcomes, it seems that someone – be it the University, SSH or student associations – has to accept that it’s their responsibility.