Why an international chooses Groningen

Groningen isn't Harvard, nor is it the Sorbonne. So, why do internationals choose this university?
By Traci White

One thing is clear. Despite the focus on internationalisation at the RUG, the roaring press releases every time the university climbs a few places in this or that international ranking and the label of ‘top 100 university’ – the University of Groningen knows where it stands. ‘We’re not Harvard, we’re not Princeton, we’re not the Sorbonne’, says globalisation studies and humanitarian action professor Joost Herman.

That means that Groningen just isn’t every student’s dream university. As marketing coordinator for the RUG, Jessica Winters, sees it, ‘when you ask pretty much any international student who is still in his or her country where they want to study, nine out of ten will say USA or UK, or maybe Canada. But the USA is the dream.’

Trouble is, those top universities are outrageously expensive. Harvard and Princeton charge more than 41,000 dollars a year. With the exceptions of the University of Oxford and the University of Cambridge, tuition at all of the top ten Times Higher Education universities cost at least 31,000 euros, if not considerably more. ‘So, most of these kids can’t afford studying in the US’, Winter says. ‘That’s when the second choice countries come in. That’s where Holland comes in.’

The problem for Groningen is that there are a whole lot of second choice countries. What makes students decide to come here? Is it simply a matter of money?

Winter doesn’t think so. Even though the top British schools charge less than most of their American counterparts, other EU universities charge even less than UK tuition fees which were raised to 9,000 pounds in 2012. Some don’t charge anything: recently, Germany abandoned tuition fees altogether, following Denmark, Sweden and Finland’s lead.

However, these countries aren’t swarmed by international students. In fact, British students often doubt the quality of education offered at a school only charging 2,000 euros a semester. ‘They think, “that can’t be good. You must suck”.’

It’s a challenge, Herman says, to convince students that you can get an equally good if not better quality education for much less money. To put it more bluntly: ‘We find it inappropriate to have to pay 30,000 per year.’

Groningen has an important trump card: English. For all internationals, English-language courses are a non-negotiable part of their university decision. Nearly 40% of all students abroad go to native English-speaking countries, but within Europe, the Netherlands has several advantages. Up to 90% of Dutch people speak English, which is the highest level of any non-native country. Also, Dutch universities offer the most English-language academic programmes of any country in Europe: 869 (runner-up is Germany with 713). The RUG itself has more than 100, including 20 bachelor’s.

That’s what brought Fabiola Polli, a 28-year-old PhD candidate in molecular biology from Italy, to the RUG. She could have gone to Spain or France, ‘but the University of Groningen was well known for its English program, which attracted me to it’.

Proximity also plays a role. There’s a good reason that Germans remain the largest non-Dutch group in Groningen. Hundreds of German students flow across the border into their neighbouring country to universities like Radboud, Maastricht and Groningen. 24-year-old psychology student Ole Gmelin had given up on studying  psychology in his home country, but then realized he could try to do it in English. He heard about Groningen through acquaintances and, after completing his bachelor’s degree, decided to stay for his master’s. ‘I absolutely love the fact that I get to study in English.’

Last but certainly not least, it’s the city itself that attracts students to Groningen. Marcus Vinicius da Silva, a 21-year-old computer science student from Brazil, had several European destinations to choose from – Paris and Nice were available to him. Groningen’s reputation for having a good mix of nationalities brought him here, as well as the size of the city and the lower cost of living that came with it. 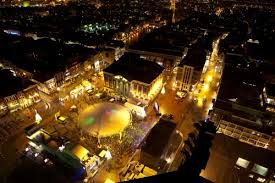 Online, sites like Reddit can give students an unbiased opinion of their future university. Being far away from the rest of the country and the general vibe of student life are cited as pros and cons when it comes to Groningen. Inevitably, the current RUG students tell it like it is: if you want to be close to the Randstad, go anywhere else. But if you want to study in a city that is a destination in itself, come to Groningen.

Winters definitely sees the city-sized town nature of Groningen as one thing that draws many students here. ‘There’s no other city in the Netherlands, and probably no other city in Europe, that has this vibe and this atmosphere, where everything is for and by the students.’