You can't possibly have missed it. Earthquakes are starting to occur more frequently in the Province of Groningen. However, you may be confused as to what all the fuss is about. So, if you don’t know anything about them, this article is for you.
By Christiaan Triebert

1. Earthquakes in Groningen? You must be kidding.

No. During the late 1950s a giant natural gas field was discovered in the Groningen countryside. Covering around 900 square kilometres, it is the largest gas field in Western Europe and the 10th largest in the world. The Netherlands has made as much as €250 billion selling the natural resource. Slightly more than a quarter of the original amount of gas remains in the ground – an estimated 720 to 727 billion m3 is left in the gas bubble that once contained over 2,800 billion m3.

Subsidence has occurred as a result of the gas extraction and is sometimes accompanied by earthquakes. The first earthquake was reported close to Assen in 1986. Since then over 1,000 have been listed. Nobody denies the relationship between gas production and the tremors. Please note, though, that the gas field is in the Province of Groningen; earthquakes in the city are rare.

Not really. The earthquakes haven’t caused any injuries and it is unlikely that they will in the future. Nevertheless, people feel unsafe and they have reason to, as bricks and tiles fall off the damaged houses. If you’re unlucky, they might fall on your head.

‘You can never exclude anything’, a NAM representative told the BBC when asked whether people should fear for their lives. ‘If people are in the wrong place at the wrong time…

3. Why are people protesting? I mean, no one has died.

For the local residents, this gas cash is both a blessing and a curse. A lot of money is being made – last year as much as €15 billion. This all goes to the state and several companies, though, including the Nederlandse Aardolie Maatschappij BV (NAM, a joint venture of ExxonMobil and Royal Dutch Shell), and GasTerra, an international company trading in natural gas. The 1810 Federal Mining Act rules that a Dutch landowner has no property rights on the minerals found in his territory and might contribute to the feeling of injustice some protesters have. ‘It is our gas!’ 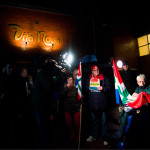 Protesters in the village of Middelstum / Photo Traci White

However, the protests were not particularly loud – until the earthquakes became more powerful. In January 2013 the State Supervision of Mines (SodM) forecast stronger earthquakes than ever before. This sparked the first serious protests. Although SodM advised a decrease in the amount of gas being extracted to prevent heavy tremors, NAM increased the drillings to 54.5 m3 of gas in one year.

Residents started to get worried, which is understandable considering only four earthquakes were measured in 1991, while last year the ground shook no fewer than 125 times. Two quakes so far have been over 3 on the Richter Scale. Inhabitants of the affected area have demanded a stop to gas production now that their houses have been damaged by the tremors.

The protesters celebrated a victory last week when Prime Minister Mark Rutte agreed that the earthquakes ‘not only cause material damage but also serious emotional damage. The Cabinet understands that people are worried.’

4. What do the earthquakes cost?

According to De Volkskrant, NAM has received over 12,000 damage claims. There is a compensation scheme in place and the joint venture has handed out €50 million so far. The media have branded the housing market in north-east Groningen as ‘ruined’, but it is hard to stick a price tag on an intangible object.

Nevertheless, a NAM spokesman declared: ‘There is no limit [on the fund]. We at NAM can reassure people that we will compensate them for any damage caused by the earthquakes.

5. Will the earthquakes stop?

Not today, or tomorrow. Even though the Ministry of Economic Affairs has decided to cut gas production, the worst shocks may yet come, as earthquakes usually occur 9-12 months after gas has been extracted. Last year was the most productive year in history, so brace yourself for some aftershocks.

6. This is crazy. Can we take a music break?

Yes, of course. We’ve put together a special playlist for you.

7. What are the consequences of less gas extraction?

That’s easy: less money. The total production of gas in the Netherlands amounts to €12 billion a year. To compare, the Dutch Government’s deficit would be similar to that of Cyprus (6.3%) without this income.

The decision to cut production will reduce revenues for the Dutch Government with the country already struggling to meet the European Union’s budget deficit criteria. According to the Ministry of Economic Affairs, the cuts will lower state income by €600 million in 2014, by €700 million in 2015, and by a billion euros in 2016 – that’s excluding money to be spent on claims, infrastructure and investment in the region. To overcome this deficit in revenue, politicians must either increase the tax burden on their citizens or cut back on spending. That’s difficult in times of recession.

GasTerra exports half its gas production to France, Germany, Italy and the United Kingdom, to name but a few. A decrease in supply will cause the price of natural gas to increase, analysts say.

8. Are there alternatives to Groningen gas?

No, not really. One option is importing gas from either Russia or Norway, but that’s expensive. Besides, the imported gas would be more inflammable and nitrogen would have to be added to use it in the Netherlands. Right now there is no capacity to add nitrogen to imported gas.

Another option would be the extraction of what is known as shale gas, which can also be found in Groningen. However, that is also costly since shale gas requires a new infrastructure.

For now, the Government has declared that there will be enough gas extracted to meet domestic demand.

9. What role does the University of Groningen play in this story?

For a long time it did not have one. Then, last October, the NAM asked the University of Groningen to estimate their ‘reputational damage’ as a result of the earthquakes. Three months later the University joined forces with the University Medical Center (UMCG) in a statement that ‘the North’ should initiate a ‘massive protest’ against the Dutch Government in The Hague.

‘The Hague’ listened. To what extent the University has contributed to the cuts in gas extraction is unknown, though. Their spokesman could not be contacted.

10. Hi. Your article was too long, so I’ve skipped to the bottom. Can you summarize?

Gas extraction has led to increasingly powerful earthquakes in Groningen. This has angered local residents and institutions, including the University.

Last week the Dutch Government decided to reduce gas production. This will cause a deficit in the state budget, and it remains to be seen if it’s enough to get the genie back into the bottle. Still, worth a try, the government must have thought.

NOTE: This ‘explanatory’ is a Groninger variant on Max Fisher’s ‘9 questions about Syria you were too embarrassed to ask’.