Wanted and on the run. To Groningen

Wanted by the Ugandan government, Frank fled to the Netherlands, helped by the Foundation for Refugee Students.  On Tuesday, he'll explain to you why we need refugees like him after a special film screening.
By Christiaan Triebert

On Tuesday, 30 September, in collaboration with Studium Generale and SIB, UAF will host a film and discussion evening on refugees and their resettlement. The documentary Refugees: Who Needs Them? Frank Kiherere Atakunda and Professor Heinrich Winters, specialist in administrative and asylum law, will participate in the discussion.

Frank Kihehere Atakunda (39) – a former student of social sciences from Uganda –  is wanted by the Ugandan government for terrorism, treason, and  murder. None of the accusations are true, but they led him to the Netherlands two years ago as a political refugee with help from the Foundation for Refugee Students (UAF).

Now, he desperately wants to study at the RUG. He has taken Dutch classes and applied for the International Relations and International Organization (IRIO) bachelor of the RUG. Sadly, he was not accepted due to failing part of his English assessment.

For now, he is working as a fruit picker in the town of Nieuwpoort. It’s very difficult for Frank to work in the orchards when he wants so badly to study. ‘I will try all I can to get into the program next year. I will give all my soul and energy, I know I would so well in IRIO.’

He is clearly committed to achieving his goals. He was already poised to graduate in 2000 when he became politically active in the lead-up to presidential elections in Uganda, a struggle that continues to this day. He quit school to focus on political activism but was quickly detained by the military, accused of being an enemy of the state. 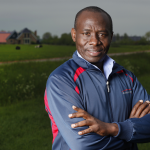 ‘With the knowledge that I will obtain in this wonderful country, I can go back’ // Photo Venus Veldhoen

It was just the beginning, though. He fled to Rwanda, but was arrested and jailed. He saw friends being killed and was tortured himself. Yet after being released, he managed to become a secretary within the Forum for Democratic Change.

In 2011, the threats were so great that he fled again – this time to Kenya – but he was not allowed to stay. And it was there that he finally met people from the UNHCR and, through them, the UAF.

Now that he’s here, it’s time to finally get his degree. He wants to complete his education and  return to Uganda to make things better for his country in the future. He dreams of returning, perhaps as a human rights activist.

‘The best thing is that the Netherlands gives me protection, and therefore I can think ahead to helping my country. Going back depends on the sitting government, but when they’re gone, I will be very glad to return home. With the knowledge that I will obtain in this wonderful country, I can go back and improve Uganda, my country and my people.’

The Foundation for Refugee Students (UAF) is an NGO that supports highly educated refugees in the Netherlands by providing guidance and financial aid for their studies, as well as helping them to find work.

The foundation assists around 3,000 students every year, most of whom receive a residency permit. They aim to enroll 60 invited refugees in higher education annually. Through the Central Agency for the Reception of Asylum Seekers (COA), the Dutch Government  proposes candidates to the UAF. Some have achieved notoriety in Dutch society, such as Ayaan Hirsi Ali and Kader Abdollah.