It’s common for students to seek out a new room or a new roommate online. But some students are only interested in living with housemates from their own country. That counts for Dutch students and non-Dutch students alike. Why?
By Traci White

The pictures alone were enough to get any student’s attention: images of a living room with a stylish leather couch and film projector, a spotless kitchen, and a sprawling bathroom filled the photo gallery.

The post in the Facebook group Free Housing Announcements in Groningen prompted dozens of hopeful responses from students, but the pictures were pre-empted with a short message in English – ‘Sorry guys, but for Chinese only!’ – and a wall of text in Chinese, occasionally punctuated by Dutch place names like ‘Zernike’ and ‘UMCG’. 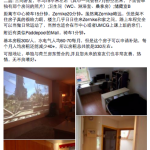 Halfway down the long list of interested reactions, Yun Si, a graduate of the Economics faculty at the RUG who made the post, explained why the requirement was set. ‘All people [who] live in the house are Chinese, so we just want to make life simple.’

‘Other nationalities need not apply’

Yun’s listing wasn’t the only one posted by international students that was not available to Dutch students. Over the course of the summer, several other listings specified that the roommates were only interested in living with other Germans here in Groningen. It’s also not uncommon for students to specify that they only seek same-sex housemates.

On the other hand, some students consciously make an effort to encourage people of all nationalities to become their new roomie by posting their listings in English. While the majority of the posts either on Facebook or on housing sites such as Kamernet do not specify nationality or gender preferences, the ‘other nationalities need not apply’ posts more often come from Dutch students than non-Dutch students. The fact that many of the posts are only written in Dutch can also discourage internationals from reaching out.

Out of a dozen inquiries for comment from people who offered rooms exclusively to their fellow countrymen, only one student responded to the request to be interviewed. On 17 August, Simon van Oosten posted a listing in the Facebook group with the caveat that only Dutch guys need apply. The 22-year-old Human Resource Management student at the Hanzehogeschool is moving out, and his housemates hope to find a new Dutch roomie. 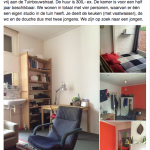 It’s perfectly legal for students who are seeking a new roommate to specify who they’re looking for without it being considered discrimination, according to Anky Kloosterman, a lecturer in the RUG’s law faculty.

‘In principle, a person providing a living space cannot make a distinction between foreign and Dutch people who are seeking housing. But that doesn’t say anything about the choices that students themselves can make as to who they choose to live with in a student house’, Kloosterman writes via email.

The Act also specifies equal treatment in the housing market, but since it’s often the current tenants seeking a new housemate rather than the property owners, it’s not seen as discriminatory for students to specify whom they want to live with.

‘It’s just easier and more convenient’, Van Oosten says. ‘It’s nice to be able to speak Dutch to your housemates rather than having to speak English with one housemate.’

He has also posted the room on Kamernet, which has gotten quite a few responses, but he says that a lot of international students are still trying anyway.

Van Oosten says that Dutch students who may feel self-conscious about their English skills might hesitate to have a non-Dutch-speaking housemate. But familiarity is important for some students, too. ‘There can be cultural difference. People just feel more comfortable with other Dutch people. You know where you stand and where you’re coming from.’

The tendency to gravitate toward one’s own kind is known as homophily. The phenomenon was the subject of former RUG student Tobias Stark’s doctoral thesis, and the UK interviewed him earlier this year about his research for an article on self-segregation.

‘Homophily is really about sharing the same interests, facing the same difficulties and feeling safe together with people who share the same background in talking about what they experience’, Stark says. The most likely way to overcome this tendency to group together seems to be simply having the opportunity to meet people from different walks of life.

In his research of homophily among Dutch high school students from different ethnic backgrounds, Stark found that students who lived closer to each other and had interests in common were more likely to create lasting friendships with their classmates, regardless of their ethnicity. Homophily can be a self-fulfilling prophecy: the more someone chooses to stick with what they know, the less likely they are to have successful intra-ethnic friendships.

Housing up for debate