Astronomers at the RUG Kapteyn Institute found a mysterious structure within our galaxy. What it is remains a mystery, but it seems to be moving.
By Christien Boomsma

It was of course a joke when RUG astronomers Vibor Jelić and Saleem Zaroubi suggested the unusual shapes they discovered with the LOFAR radio telescope might be the ionised trail of a spaceship. But it is an extremely exciting find, all the same. At no more than 300 light years away from our Milky Way, they found regular, thread-like shapes that no one ever saw before. 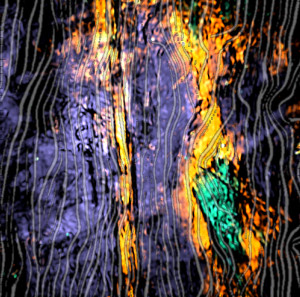 ‘Regular, elongated shapes like this are extremely unusual in our Galaxy’, says Jelić, who works as a postdoc at the Kapteyn Institute. ‘And why are they so big? We just don’t know.’

The astronomers were using the extremely sensitive LOFAR radio telescope to investigate the first light ever to have been emitted in the universe. When they analysed their data, they found something they hadn’t been looking for: spaghetti-like structures that were very close by. Surprised and excited, they compared their data to those of the Planck satellite. The Planck data, albeit less detailed than that of LOFAR, indicated the observations were reliable.

The mysterious structure probably consists of gas and dust, Jelić believes. ‘But for the structures to be so straight, they have to be the result of a unique event.’

Trail of a supernova

He thinks it may be the trail of a fast-moving star or gas pressurized by the explosion of a supernova. ‘We think they may have emerged after a supernova exploded and created the so-called ‘local bubble’ around our solar-system.’

If this is the case, more mysterious structures may appear. ‘That’s why we will be surveying much larger areas to see if we find more.’