The film studies minor is doing well - perhaps too well. Due to lack of space in the Forum Images cinema, students sometimes have to sit in the aisles.
By Koen Marée / Photos by Traci White / Translation by Mina Solanki

Miklós Kiss immediately called the faculty office when he heard just how many students had signed up for his film analysis course: total enrolment had risen from 130 last year to 200 this year. ‘We’ve really peaked. Last week, we actually had to bring extra chairs into the theater’, says the Hungarian-born instructor, laughing.

Kiss is well aware of the preconceptions from those outside the study programme. People assume it’s a fun, easy course – a simple way to earn study points. ‘Ultimately, around ten per cent drop out, for whatever reason. This is why we could allow the 200 registrations. However, the system does not work well in regard to the dropout percentage: motivated students who register after the limit is reached are theoretically not allowed into the course. A few students emailed me with good motivation letters, so I personally registered them in the course.’ 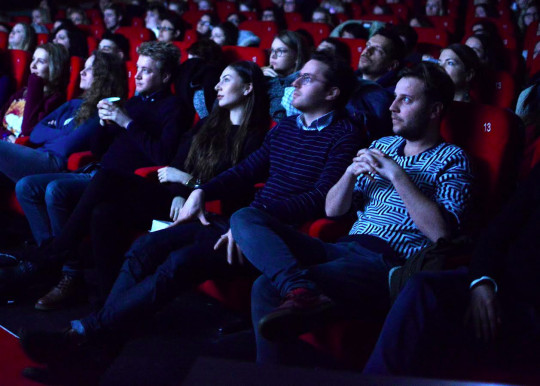 Students of the film studies master programme stare at the screen during a showing of the ‘Le Doulos’ at Forum Images on Wednesday morning.

Kiss describes the study as fun, but it demands hard work. ‘From the first block test results, you can see that students are mistaken about how much work they have to do. Roughly 30 per cent do not pass the first time.’ In terms of job prospects, he is optimistic. ‘It is probably somewhat naïve, and it is true that there are not many jobs to be found in the entirety of the cultural sector. But I believe in dedication. If you believe in something 100 per cent, you will get there. Our most passionate students have made it, and I am here today as a teacher thanks to that same conviction.’

The golden age of the film is still to come, said director Francis Ford Coppola – director of The Godfather and Apocalypse Now, among others – last week in de Volkskrant. ‘I would rather call it the ‘golden age of audio-visual culture’. That covers the subject much better, because TV series are booming for example’, argues Kiss. ‘Revenue is still increasing in the film industry each year, even though the number of movie tickets may be decreasing. I am also lobbying to change the name of the course from ‘film analysis’ to ‘audio-visual analysis’.’

Kiss has many arguments for changing the name of the course. ‘We combine the classic analytical approach to film with a focus on new technology. I feel that that is also the programme’s strength and that it will appeal to students. The film industry is rapidly changing due to the emergence of 3D and virtual reality, for example. That produces many great challenges. We want to keep up with the newest technology.’

Every Wednesday morning kicks off with a lecture in the jam-packed screening room at Forum Images, followed by a film screening. The film is addressed in eight different work groups in the days thereafter. Despite the appeal, Kiss expects an eventual decline in students. ‘The new implementation of the minors will no doubt have consequences for us. With 200 students, we are at maximum capacity in any case. We’ll see what happens; my job is to keep the quality high.’