More than beer and bratwursts

Despite thousands of Germans studying at the RUG, there was no German student association at the university until this spring. With Germans forming the largest non-Dutch nationality represented at the university, can Groningen call itself home to a German subculture?
By Valia Papadopoulou and Nina Yakimova

It all started out as an assignment, funnily enough. Tim Steinhoff, André Assenmacher and Christian Seidl are the founders of the German Society Groningen, and it was a final project that Steinhoff and Seidl had to do for their Honours Master which prompted the development of the society. It struck them as fairly odd that no such group existed, given that German students are second only to Dutch in numbers enrolled at the university: this academic year, there are 1,863 Germans enrolled at the RUG.

The founders of the German Society Groningen (from left to right): Christian Seidl, André Assenmacher and Tim Steinhoff.

‘Many prestigious universities around the world – like Harvard and Oxford University – have their own German clubs. It seemed like there was a gap in the local market, so we decided that it would be a good idea to set one up in Groningen’, Seidl adds.

Although the other internationally-affiliated student clubs in Groningen are open to people from around the world, they still tend to predominantly attract their fellow countrymen and women. Seidl says that their society, which was founded in March and has 25 members so far, is deeply committed to extending a warm welcome to everyone – that desire is reflected in the group’s English-language website and meetings.

‘If you don’t know a lot about a country, you tend to stick to the stereotypes’
That is what prompted Christian Donnges, a 23-year-old Dutch-Canadian student, to sign up. ‘I liked the idea of an association which will be inclusive of all nationalities despite its German orientation. It’s a great opportunity to learn more about Germany in terms of careers, culture and language’, he mentions.

Teaching others more about his homeland matters to Seidl, too. ‘If you don’t know a lot about a country, you tend to stick to the stereotypes.’ He is well aware that many identify Germany with Bier und Bratwurst, ‘but there is much more about Germany to discover’, he says. 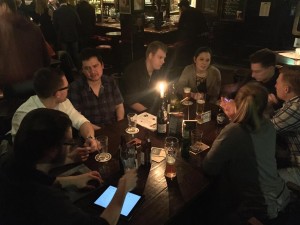 The members of the German Society during their first Stammtisch, an informal group meeting.

For students who are interested not only in brushing up their German language skills but also in potential job opportunities across the border, the German club could also prove to be handy. As opposed to the Netherlands, job interviews tend to be more formal there and companies place greater emphasis on a candidate’s academic performance than their CV. Seidl believes that since NEXT Career Services can only provide general advice to students considering a career in Germany, the society could pick up the slack. ‘We are Germans, so we could advise people on how to get prepared for a job interview or write their CV.’

Job-hunting is not the only difference between the neighbouring nations, according to Seidl. ‘The Dutch are more direct, open and a bit more laid back than the Germans. Also, the Dutch academic staff’s attitude is different. In Germany, it nearly never happens that an academic will allow you to address them in an informal way. Here, you just call all professors by their first name.’

However, the two countries still undeniably have a lot in common, and being a native German speaker has its advantages in the Netherlands when it comes to learning Dutch. The University of Groningen even offers Dutch courses specifically for native German speakers. Antoinette Maassen, coordinator of the Language Centre Office, explains why: ‘Most of the German students find the level of the regular Dutch courses too easy.’

This study year alone, roughly 500 native German speakers followed the language courses offered by the RUG. Dutch language courses are mandatory for some German students, and those who have taken them recognise that they made the transition into Dutch culture easier. ‘When I started my bachelor in arts, culture and media in 2012, half of the courses were taught in Dutch’, says Massimo Jahn, a former student at the RUG. ‘Speaking Dutch helped me integrate more and break the language barrier.’

But not all students manage to go Dutch, be it linguistically or culturally: in a survey of 100 current and former German students in Groningen (see box ‘Why Groningen?’), 13.5 per cent of respondents indicated that they did not put any effort into integrating. ‘A lot of German students come here only to study and colonise entire buildings and study programmes’, says Jago Müller, a master’s student in American Studies at the RUG.

‘A lot of German students come here only to study and colonise entire buildings’
‘I think actually solidifying a German presence in the city might bring out some negative sentiments with the locals’, Müller says. As far as ‘negative sentiments’ are concerned, Seidl does not believe anyone would associate Germany of today with its nationalistic past. ‘I don’t think people do that, but even if they do, then I can’t help them. I’ll leave them with their stereotypes.’

Some German students wonder why a club is even necessary. ‘The majority of the people I hung out with were German, around 70 per cent. This was already a form of micro-society on its own’, says Mathias Borha, a former psychology student. Müller agrees: ‘There are already a ton of Facebook groups for that and a lot of the time, the German students seem unwilling to actually integrate and, in fact, divide the student populace and further keep people from integrating and expanding their horizons.’

Seidl is aware of that feeling. ‘Some Germans come to Holland and stick with other Germans. They don’t try to learn Dutch and return to Germany once they graduate. But why would someone want to study abroad if they only hang out with people from their own country?’

Müller feels the same: to him, only interacting with other Germans defies the idea of studying abroad. ‘During an introduction lecture in the first year, I was told that Germans tend to stick with their own kind, and I have just always hung more with the international crowd so that might be why I never crossed paths with a lot of them’, says Müller.

For now though, the founders’ main concern is who will succeed them this fall – not all of the members are planning to stay in the Netherlands after all. ‘Since I will likely move to the Randstad next year and Steinhoff might go back to Germany, we need to build up a board that will be able to handle the association’, says Seidl.

In the UK’s survey of 100 current and former German students at the RUG, 97 per cent of those surveyed said they decided to move to the Netherlands to attend a study programme. One reason for choosing to study at the RUG is the relatively low language barrier: while study programmes are available in English in Germany, this is still more the exception than the rule. As such, the fact that there are 1,000 German students enrolled in the Faculty of Behavioural and Social Sciences, mostly in the English track, should come as no surprise.

Most interestingly, our survey’s results actually suggest that the perception that German students only stick to themselves is not all that accurate: only 14.5 per cent of the surveyed students stated their preference to live in a house inhabited exclusively by Germans.