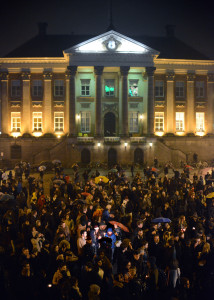 At exactly six o’clock, the Martini tower lights up in the French tricolour. Standing in the drizzling rain, the attendees burn their candles while hunkering down under umbrellas. They are thinking about the victims of the attacks in Paris of Saturday night. ‘Groningen is hereby reducing the distance to Paris to a human distance, just as they did after Charlie Hebdo. We are trying to stand shoulder to shoulder, to cry together, mourn together, and to find the strength to continue’, Mayor Peter den Oudsten said in his speech.

‘We must refuse to continue the war that others are trying to wage. Closing off our society is not the answer. We have to continue to represent the values liberty, equality, and fraternity’, Max van den Berg continues. ‘Our ship is being tossed on the waves, but we will not sink. Not in fear, and not in hatred’, Anne-Christine Dreue says, full of hope.

There is a moment of silence. Afterwards, a large group of people remains for a little while. A few of them start singing La Marseillaise, the French national anthem. Initiator Gabby Rialland, an International Relations student, is visibly affected. ‘I heard what had happened on Friday and tried to reach everyone I knew. Everyone was safe, it turned out. On Saturday morning, I started thinking about what I could do. I wanted to bring the people of Groningen together’, says the French student.

Judging from the 300 attendees, she more than succeeded. ‘It started as a small event, but I kept getting messages and people saying they would be there. The municipality called and wanted to be involved as well. Finally, I contacted the French consulate in Groningen. I’m incredibly proud of everyone who came. This is an amazing way to show their love. The most important thing is that people don’t get scared and stay at home.’

‘I was in Paris two weeks ago’
Many students, most of them French, look for support in each other. Communications student Charles Grezard is originally from one of the Parisian suburbs. He, too, immediately called all his friends and family. They were safe. ‘After that, I spent the entire weekend watching the news. The events have not made me more scared; they have made me angrier. This could happen anywhere.’

Luca Augé, an International Relations student and Charles’ friend, adds: ‘I was in Paris no more than two weeks ago. My sister and I had made plans to go to one of the bars where the shootings took place. Right now, I would really just like to be in France to support the people. I’m surprised by the large amount of people that came to the Grote Markt tonight. Especially because not all of them are French. That’s truly touching.’

Slowly but surely, everyone leaves for home. The remaining candles, flowers, and stuffed animals are left at the steps of the VVV building (the Tourist office). ‘Groningen stands for Paris, Beirut, Baghdad’, says a cardboard sign. It is an appeal for peace everywhere. Today, Monday, the recent events will be commemorated as well. At noon, the entire European Union held a minute of silence in commemoration of the victims.