The RUG is starting an online course to help polish up its student assistants.
By Peter Keizer / Translation by Mina Solanki

On the 18th of April, the university will launch yet another new online course. But this time, it’s not to attract international students via popular Massive Online Open Courses (MOOCs): it’s to train the university’s own student assistants.

The free, five week long programme is called ‘Students taking charge of higher education’, during which students will learn how to conduct themselves professionally, prepare lessons and learn how to be good teachers.

‘It is an open online course which will be accessible worldwide’, says Ine Noben from Educational Support and Innovation (ESI). The English-language videos are meant to give insight into what a student assistant does. ‘For foreigners, what we do here is very strange. I myself am Belgian and when I first arrived here, I thought it was really odd that students teach lessons here. But the university truly believes in the added value and quality of students.’

However, one year ago, members of student party Lijst Calimero experienced for themselves that the quality of the students is sometimes inadequate. ‘I’ve had encountered student assistants who were not that good, and I wanted to tackle this’, says Rowanne Degenhart, a former member of the Lijst Calimero faction in the University Council and the initiator of the online course. ‘We received complaints from several faculties. We talked to contact people in the various faculties and it appeared that the student assistant position was well organised in some faculties, but not by all. In cases where the student assistant position was not well organised, everything was left to the subject teacher.’

Calimero raised this issue to the University Council, after which the University Board decided to allocate more funds to improving student assistant mentoring.

‘We had a limited budget, but we had to have broad reach, so that is when the idea for an online course came about’, says Noben. ‘When we were in the development phase, we thought: now that our scope is greater and the budget is already set, it would be better to branch out by focusing on student directors. We are now trying to make the diversity of students in organisations clearly visible. As such, people from representative bodies and the presidents of the ACLO, KEI, ESN, USVA and SKLO are all coming forward with their stories as to why they think that a board position adds value to their CVs and personal development.’ 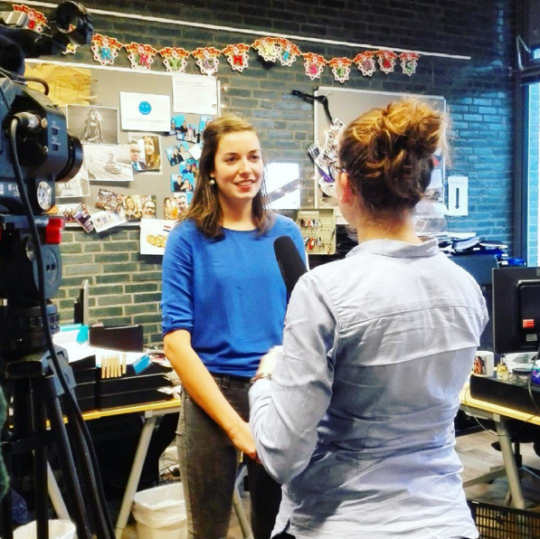 In the videos, student assistants and student directors talk about their experiences. ‘But we also have street interviews with students where we ask them what the traits of a good teacher are. They have one minute to talk about how being a student assistant has contributed to their personal development. We have a director from the teaching training degree who shows you how you should teach students. It is very varied.’

According to Noben, the whole project has cost ‘a few thousand euros’. ‘It is the most budget-friendly solution that we could find. Speaking to all of the student assistants individually would have been unfeasible.’

The material is ready, but the videos still have to be edited. Degenhart hopes that the videos will have an impact. ‘I really hope that the student assistants involved will be enthusiastic about it and that they will spread it via word of mouth. I am trying to do that myself. I am trying to get everyone who has been involved to promote it.’

She is, in any case, proud of the project that she set into motion with her fraction a year ago. ‘I think it’s really cool. It is the most tangible thing that we have done in our year in the University Council. If friends or family ask what we do in a board year, I can now say: well, something like this.’