Summer has begun in Cairo, which means temperatures are going up really fast (think 38 degrees). I finally discovered why all taxi drivers in Cairo keep a box of tissues in their car: it’s not to blow their noses or whatever, but to wipe the sweat off their faces. In between the very hot days, I met up with Shady, whom I got to know via Baher Ghorab.

Among many other things, Shady – who actively participated in the revolution himself – told me about all the ins and outs of the 2011 uprising. If you followed the news of the revolution, you probably recall the images of thousands of people who gathered on Tahrir Square. For me, one of the more striking things to hear was the details behind the images and articles in the news.

For example, the eighteen days in Tahrir Square were not just eighteen days of chaos. The ‘city within a city’ that was created on Tahrir Square was actually very well organized. Committees were created to take care of everything you can think of: from prayers to hair cuts. These committees were formed by (student) parties who all worked together, called the italaaf shabaab il thawra (youth coalition of the revolution). The system of committees proved to be very effective. Nobody can be good at everything, so the people who joined did what they were best at and organized themselves into committees. 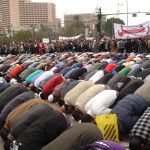 There was the committee for media which took care of social media, created a radio station and a sound system, and set up a ‘sit-in’ movie theater on the square which mainly played funny programs. Details like these conveyed the message that people were not going to leave the square soon.

The security committee was formed during the ‘Battle of the Camels’ when Mubarak supporters and thugs entered the square on camels to fight the demonstrators. At first this fight was very chaotic, but after some time, it became very structured: there were demonstrators who collected stones, people who threw the stones, people who collected food for the ones who were fighting and people who brought the injured to the hospital area – mustashfa midani – in the square.

This task division remained in effect throughout the eighteen days. Apart from this, they also created walls made out of burned out cars, barbed wire, or stones to protect the square. Symbolically, this committee not only protected Tahrir Square: they protected the future of Egypt as well. 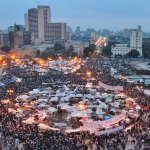 Then, there was the artist committee stationed near the KFC on Tahrir Square. A lot of people joined this committee and tried to draw, act, sing, or make music. Everywhere on the square you could find people watching shows, most of them comedy. People would just watch these shows and laugh. Shady told me that some people who were watching a show would just say, ‘When the fight is coming, we just stay here, and when it gets very close, then we will run away’. These shows  not only served the purpose of fun – they also functioned like a battery charger for many people.

Besides the above mentioned committees, people also organized a football match called the ‘Revolution Cup at Tahrir Square’ in which many people joined. Couples got married in Tahrir, prayers were organized, and some people even offered free WiFi and hair cuts for the people in the square.

The eighteen days in Tahrir Square were not all about demonstrating and fighting as the media often shows. People created, so to say, a city within a city where at many times a good atmosphere prevailed as well. All parties that joined in the demonstrations against the regime were united, which represents the general atmosphere of the revolution: an Egypt in which the people were united against the regime and its followers.