If the RUG wants internationals to learn Dutch, it has to appeal to their imagination. ‘They have to imagine themselves speaking it’, says Kirsten Kolstrup.
By Christien Boomsma

Imagining yourself speaking a language in a given situation is essential for learning a second language, says Kolstrup. It precedes the more formal aspects of language, such as vocabulary meaning and grammar rules. Teachers could take that more to heart, she says.

The second language specialist from Denmark will receive her PhD later this week for a thesis on what motivates people to learn a second language and keep on doing so.
It’s a very relevant topic: speaking the language is key for integration of immigrants into a new society, as well as for international students in their new academic environment. 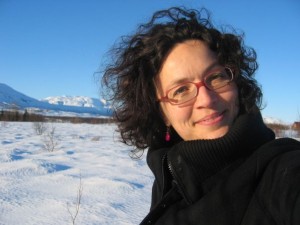 Her research focused on the case of a Zambian woman named Mulenga who came to Denmark ‘for love’. She married a Danish man and became stepmother to his nine-year-old daughter – and had to learn Danish.

Kolstrup followed Malenga for many years, interviewing her regularly and monitoring her progress. ‘An in-depth case study like this brings to light what happens outside the classroom’, Kolstrup says. It can make it clear why a teaching approach that works for one student may not work for another.

In the classroom, Mulenga seemed shy and didn’t participate much, which could easily have given the impression that she was not very eager to learn Danish. However, she turned out to be highly motivated to speak Danish at home.

‘She really threw herself into creating a relationship with her stepdaughter, again and again, even though she was challenged by her over the right to discipline, for example. But she kept pushing to speak and get her meaning across.’

However, the Danish classes were highly focused on grammar rules and vocabulary meaning, which didn’t feel relevant for her. What Mulenga needed was a way to talk to her stepdaughter.

‘You have to imagine yourself speaking the language’


‘So that was a problem, too. You have to imagine yourself in certain situations and speaking the second language. But all those pictures turned out to be wrong. She had to make new ones’, Kolstrup says. ‘And luckily, in the end, she could.’

Teachers should relate to the motivation of the students and find out what the student wants to use the language for and what the kinds of situations are outside of the classroom where they speak it. Is it to get a job? Is it to have a conversation with your housemates? Or is it to be able to read relevant literature? It makes all the difference.

‘Let students practice the language they need in actual conversations outside of the classroom’, Kolstrup says. And make sure they have the chance to practice, too: when your efforts to speak your new language – Dutch – are met with answers in English, you can quickly lose the drive to learn.


One way to start would be to make people at the university aware of the mechanisms at work, says Kolstrup. If someone speaks to you in Dutch, you should answer in the same language. Why not actively communicate that policy?

The other potential problem – the fact that international students live together – is harder to tackle. Most internationals at least start out in a room through the Housing Office, so they are automatically thrown together.

The RUG is on the right track by offering free language courses to students, Kolstrup says. The next step could be to follow the example of the University of Copenhagen, which is investing research money into how the native language and English is actually used in various university settings and trying to ensure equal access to both.

And lastly: look at the courses you teach. Do you know why the students are there? Help them imagine themselves speaking your language where they want to.