All those cards during the holidays are nice, but they cost a fortune in postage - unless you are a student, that is.  That's the claim of the ‘STS’ myth: if you put these three letters (which stand for 'student to student') in the space for the stamp, your postcard will actually arrive.
By Koen Marée / Translation by Sarah van Steenderen

Willemien Wiegersma and Frank Luijckx, Sociology and Biology students respectively and both members of Aegee Groningen, tried out the myth. Willemien sent a letter to Prague, Frank sent one from Barcelona to his girlfriend. Both letters arrived. Does that mean it really works?

The Universiteitskrant found out. We first searched the dark corners of the internet, which provided different explanations. ‘It is an existing code, conceived to help students studying abroad,’ said one website. ‘All this is due to the goodwill provided by the postal companies,’ said another. Some say the code ‘2-FA-BE’ would be accepted as well.

Time for action: right before Christmas, we sent three friends – Christiaan Triebert, Tjeerd Wiersema, and Marrit Veninga – three cards each to wish them happy holidays. One had the code ‘STS’, another ‘2-FA-BE’ and one had a code we made up: ‘LFS’ (letter from Santa). This was the control.

Marrit in Copenhagen was the first one to receive two cards. Interestingly enough, only the card with the ‘STS’ code had not arrived. Christiaan let us know from London that all three cards had arrived, although he did have to pay for the card with the non-existent LFS code. The rest were handed over by the concierge without any issues. 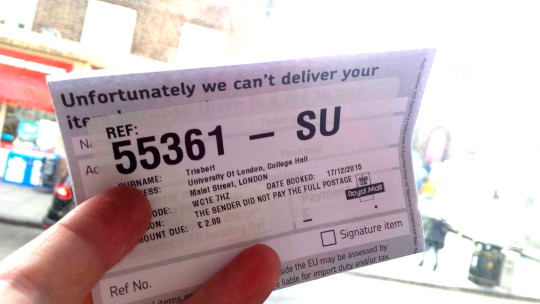 Next was Tjeerd, who was studying in Grenoble. He spent Christmas and New Year’s Even without our cards. We grew a little less enthusiastic, in spite of our successes in Denmark and England. The myth became a little more mysterious again.

PostNL had answers. ‘We don’t know anything about the STS code. We simply process this mail because we process all mail. Call it goodwill. When mail has no postage, we add those costs. (Editor’s note: That means the recipient is responsible for them.) Unless a postcard slips through the cracks, that is. Unfortunately, we don’t find everything.’

So, it’s goodwill, then. Even though four out of the nine cards slipped through the cracks this time, the other five got stuck somewhere in the delivery process. It is interesting to test out yourself, especially when you have spent your entire vacation budget and want to let your parents know that you had a nice time.

But ‘free mail’ unfortunately turns out to be a myth. If you want to make sure your mail arrives, it is best to just buy a stamp.