I had concluded that negative 15 degrees isn’t that bad when you wear thermal clothing, adequate shoes and head gear before agreeing to take part in a tradition for Epiphany, a major holiday in Orthodox Christianity. In a practice comparable to the Dutch New Year’s dive, I took a dip in the icy waters of the Black Sea amidst the smiling faces of Ukrainians who laughed at my shocked expressions and cries.
By Lisse van Vliet

It was on this same shore in Odessa that I found myself two days earlier, roaming a desolate ship factory during one of the worst snowstorms that year. The pictures of the whole factory’s Soviet leadership still hanging on the wall at the entrance and the old motivation plaques in Soviet Realist style decorating the courtyard gave me the sense of having walked onto a movie set. This impression was only strengthened by the gasmasks, a broken Lenin statue and the bottles of vodka lying around. Out-of-use factories are widespread across the former Soviet Union since a lack of resources for modernisation have forced the government to watch such buildings fall into decay. 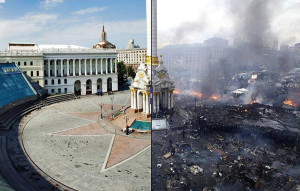 Before and after images of the Maidan square during the protests in 2014.

Especially because this trend can also be seen in the maintenance of apartment buildings, I was surprised to find some top-notch, modern, hipster ventures in Kiev: they almost made me completely forget that I was in Eastern Europe. A shoeless cafe, an internationally-oriented music venue and a highly modern library made me aware that some parts of Ukrainian society are basically equal to those in the West. This applies to the employees of large foreign companies established in Kiev as well.

Having had the privilege to stay with people adhering to different beliefs concerning the events on the Maidan square, I once again found out that the crisis was much more complicated than often portrayed by the media. Ivan, although lacking interest in politics, supports the toppling of Yanukovich and breaking away from Russia. He graduated a few years ago and he tells me about how the owners of the shop where he worked invested in food supplies for the protesters on the independence square. ‘I think it is a victory for self-determination, and Russia should know that we are not to be controlled’, he says firmly.

‘Russia should know that we are not to be controlled’
On the opposing side is Dima, who works as an electrical equipment marketer for an American company in Kiev. His main grievances are the historically low exchange rate of the Hryvnia, the fierce nationalistic tensions in Ukraine and the loss of his favorite holiday destination: Crimea. The economic costs of the war made the Hryvnia, which is the Ukrainian currency, decrease almost three times in value in comparison to the euro. He believes that if the Ukrainian population would just have accepted Putin’s deal, instead of revolting, many foreign investments would have been safeguarded and the civil war would have been prevented.

Another thing he regrets is the strong anti-Russian sentiment that came with the escalation of tensions. ‘Some people force you to speak Ukrainian, threatening the many for whom Russian is their mother tongue’, he says. Finally, the concession of Crimea to Russia forces him to look for other, often more expensive, destinations to practice outdoor extreme sports.

All in all, the outcomes of this ‘Revolution of Dignity’ or ‘Coup d’État’, depending on the perspective from which you judge the Maidan events, are far from clear-cut and leave the nation divided to the bone. Only time will tell whether Ukraine can overcome the many internal problems it has, which is something that I will certainly keep following now that my stay in Russia and Ukraine has ended.