While waiting for the bus to bring me to the airport for a family rendezvous, I witnessed a black Citroën crashing into a yellow Yandex cab. Car accidents are the order of the day in Moscow, but the unfolding situation I thought only possible in Russian Dash-Cam Compilations on YouTube.
By Lisse van Vliet

The Central Asian-looking taxi driver was caught by his infuriated counterpart and endured minor injuries before wrenching free. He immediately rushed to the back of his vehicle to retrieve a baseball bat and started smashing the windows of the car of his fleeing attacker!

Having spent almost two months in Moscow, my roommate Sam, also studying IRIO at the RUG, and I came to the conclusion that we have not yet encountered the extreme situations we would have expected to come across. As if someone overheard us, the event described above took place merely days later. Situations like these remind me that this country is just a bit more extreme in certain aspects. One of these aspects is that conflicts in Russia tend to result much quicker in physical violence, often lacking the verbal confrontation. In tandem with the lack of trust in the authorities described in my last blog, this creates a social environment much harsher than in Western Europe. This lack of trust raises the barrier for legal proceedings significantly.

Incidents involving exchange students range from a few cases of robbery and a girl’s drink being spiked to a Dutch guy being beaten up by some drunks when going out. A bad record, but Moscow still ranks lower than Rome, Dublin and Brussels on the European crime rates list. When I asked five Russian female students whether they feel safe in Moscow, they replied that when you take certain basic precautions, it is perfectly safe. ‘As long as we don’t wander off alone at night in the outskirts of the city and keep a close watch on our valuables in the metro, everything will be fine’. 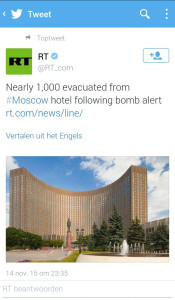 In this aspect, Moscow can be compared to Paris, which unfortunately just has witnessed the most deadly event on its own soil since World War II. Although ranking higher on the criminality list and witnessing an upsurge in terrorist attacks recently, I personally have never felt unsafe in the French capital, my last visit dating to back to August. As the city of lights mourns, the search in Moscow continues for accomplices to the terrorist attack on the Moscow metro that was prevented a month ago and, of course, all eyes are focused on the recent downing of the Russian plane in the Sinai desert.

To emphasize the threat, just this weekend, a fake bomb alert prompted Hotel Kosmos, a mere 300 meters from our dormitory, to evacuate around 1,000 guests. Moscow has surely had its fill of terrorism before, with bombings at Domodedovo airport and the metro in 2010. Before ISIL, the main source for terrorism used to be the southern Muslim provinces of Russia, mainly Chechnya, where two wars were fought. The peace there now seems fragile with leader Kadyrov being almost completely autonomous from the central government and having unrestrained power.

Although Moscow is in many ways very different from other European countries, it is not at all as dangerous or inhospitable as sometimes is suggested. This perception mainly lies in the fact that it is very other and lacking conveniences we have become so accustomed to. Signs are often only in Russian (using the Cyrillic alphabet), not everyone speaks English or is willing to speak it and (even) I still often underestimate how different the Russians are in their thinking. Something being different is not the same as being bad, inferior or threatening. Now is more the time than ever to remind this distinction and unite despite conflicts of mind.