Tutoring secondary school pupils is a popular part-time job among students. However, Tom Dijkstra and Matthijs van de Grift saw that many tutoring companies were expensive and impersonal. So, they decided to start their own business BijlesMatch in 2013. In October, they opened branches in four new cities.
By Tim Bakker / Translation by Mina Solanki

Dijkstra had already worked as a tutor at StudentsPlus, one of the larger tutoring companies in the Netherlands, but he was dissatisfied with their way of working. Teachers registered their hours worked on paper instead of digitally and were paired with the students in a very lazy manner. ‘How can you guarantee quality like that?’ he found himself wondering. ‘If you want tutoring, you have to call a 0900- number with some of the bigger companies. You then get connected to a call-center, and the prices are ridiculous sometimes.’

He had already fantasized about setting up his own company with his former classmate Matthijs van de Grift, and in light of his experience at StudentsPlus, starting a tutoring company seemed the obvious choice. Students and teachers would be quickly and personally brought into contact with each other, the processing of information would be digital and the costs per hour low. They presented their idea in the finale of the Anner Award 2013, a competition for entrepreneurial students, and they finished in third place. Bolstered by this recognition, they set the business up. But how do you start something like that?

‘First, we brainstormed about the things we needed to think about, for example by watching YouTube videos about how to start a business’, explains the Industrial Engineering & Management student. ‘From the points raised, we made a to-do list, and that is how we started. For a well-functioning website back end, we had to hire a programmer, but otherwise, we have done as much as possible ourselves.’

‘Grades are becoming more and more important’
Their concept caught on in Groningen. Soon enough, a branch was opened in Rotterdam, where Van de Grift now studies. As soon as that branch was also doing well, two more were set up in Amsterdam and Utrecht in partnership with a third student, Erwin Koning. Further expansion plans were executed in October: pupils in Leiden, Delft, Eindhoven and Nijmegen can now also receive teaching through BijlesMatch. ‘The goal is of course to open branches in Maastricht, Tilburg, Enschede and Wageningen in the end, so that we are in every university city’, says Dijkstra enthusiastically.

Dijkstra can’t complain about a lack of enthusiasm. ‘You can see that the study environment is changing. We live in more of a performance-based society, there are an increasing number of study programmes with a fixed number of places and big companies who ask to see secondary school grades at interviews. We do not just have pupils who would otherwise not pass their exams; we also have people who want to turn a 6 into an 8 [out of 10]. Grades are becoming more and more important.’ 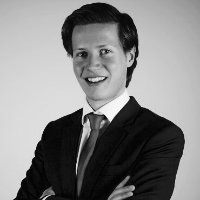 In addition to Dijkstra, Van de Grift and Koning, seven regional managers who supervise the pairing of 219 teachers, have been hired. Dijkstra tries to provide more than just a salary for the first group with his company. He organizes sales and media training, for example, and enables the regional managers to gain entrepreneurial experience. ‘This way, we help pupils with learning and at the same time we learn something, too. That is also important at the end of the day.’