‘My father is more of a union man’

Tim Boelens was already working with the VVD (People’s Party for Freedom and Democracy, ed.) in Hoogezand-Sappemeer when he was a teenager. In late December, the master’s student of Economic Geography, now 25, was named the group leader of the local party. It’s a difficult job, but he is honoured to do it.
By Koen Marée / Translation by Sarah van Steenderen

When he was still a high school student, Boelens would cycle home through the vacant city centre of Hoogezand, astonished. Hoogezand: the city that thought in the ‘60s thought it could grow to 80,000 inhabitants. Around him, he saw everything that was emblematic of metropolitan problems, like a small-scale Rotterdam. But how could he contribute to the solutions to these problems all by himself?

At school, he was part of the debate team. For the first time in history, they had made it to the next round in the Lagerhuisdebat. ‘Debating was difficult for me at first, because I’m kind of an introvert.’ But Boelens learned by doing. He overcame his doubts about joining a political party. The young man was given a warm welcome at the VVD.

The choice of VVD had nothing to do with his parents. On the contrary: ‘My father is more of a union man. And my mother usually votes for someone she likes.’ So explored local politics on his own. ‘The Partij van de Arbeid (Labour Party, ed.) has been the largest party in the municipality since time immemorial, although the SP (Socialist Party, ed.) surpassed them in the last election. At that time, I thought the establishment had made a mess of things.’ The VVD turned out to have concrete plans to fix that.

So there he was, a young whippersnapper among all the old and wise men and women. At first he just visited the faction, then he started playing a supporting role and in 2011 he joined the party as a council member. ‘There’s that student kid again’, the other members seemed to think. At times, Boelens would use this natural role to his advantage. Five years in, he is taken much more seriously and people listen to his opinion. ‘Whether or not they actually do something with it is another matter altogether.’

‘‘There’s that student kid again’, the other members seemed to think.
In December, the 25-year-old was inducted as group leader. The municipality of Hoogezand-Sappemeer, and the local VVD along with it, is facing several major challenges. In 2017, they will merge with Slochteren and Menterwolde. And that means they need to campaign. ‘I do hope to have finished my studies by that time, because I’m a little behind there.’

On top of that, Hoogezand is struck by earthquakes more than they’d like. ‘It’s a difficult situation for us in the local party. It’s a very rational story: the country can’t do without the income because that would be too disastrous to the budget. But my parents’ house is damaged and one time, I even felt an earthquake in my room in Groningen. The story is also a challenge in campaigns: people accuse you of things you can’t really do anything about.’

Approximately eight years after he used the vacancy in Hoogezand to get into politics, he is still as idealistic as ever. At the same time, however, Boelens wonder what there still is to strive for. ‘I do notice that I tend to put setbacks into perspective. After all, we have so much freedom. Sometimes I think we could do with a little less, especially taking into account the times that are coming. This is the largest economic crisis since the Second World War. But at the same time, I’m no doomsayer. I’m mainly curious to see how it’s all going to go.’ 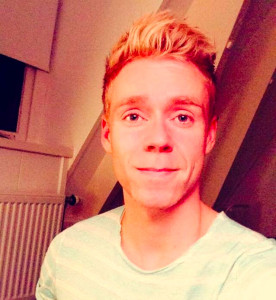 Tim Boelens has been the leader of the Hoogezand-Sappemeer faction of the VVD since December.

He often uses his freedom of movement to escape everyday life. ‘I’ll book a one day round trip and fly back and forth to Paris, for example.’ He goes for walks along the Seine, visits the Louvre, and has a cup of coffee at a coffeeshop. ‘That’s my way of procrastinating.’

He would love to work in aviation. ‘That is my ultimate dream.’ But he won’t rule out a political career: ‘If I can manage it. I still think sometimes: am I too much of introvert? That’s something I’ll also be figuring out in the next few years as group leader. My job in politics is also a great introspective process. Should I ever get a shot at the right position, then that is a challenge I’m willing to face.’